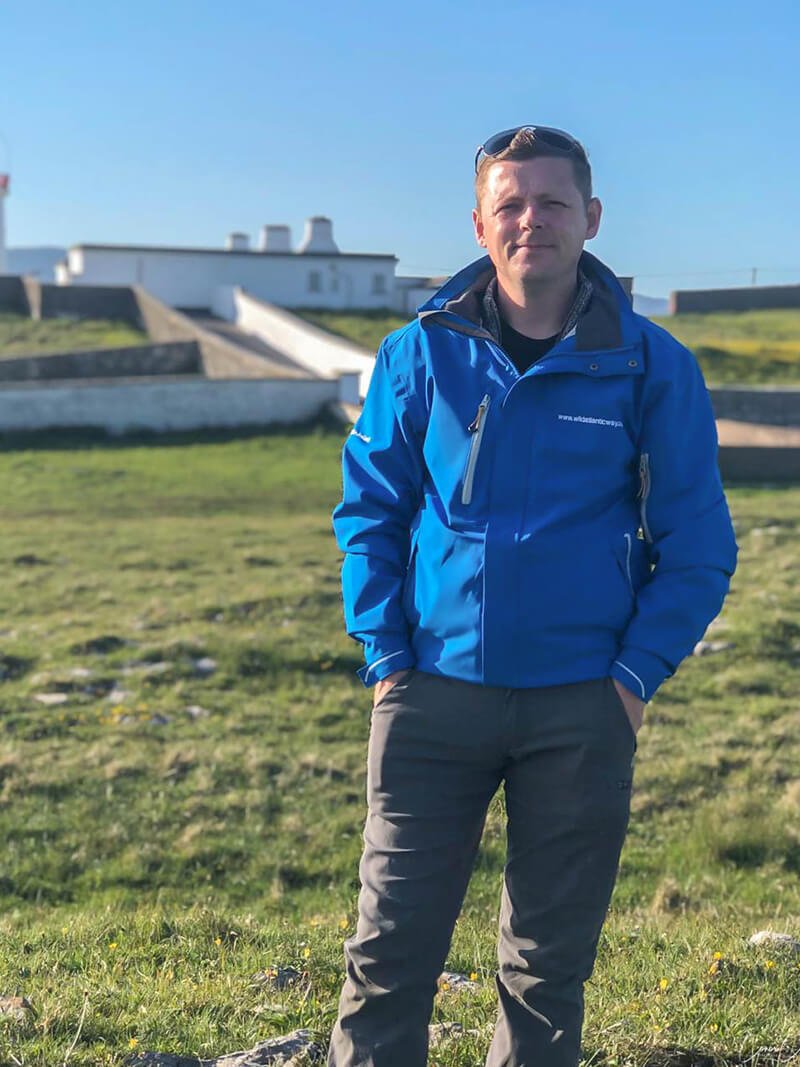 Hi i am Conor, an aerial photography hobbyist from Co. Antrim.

I had dabbled in photography for a while, first on my iPhone ( like most of us have) then i thought I’d move onto a DLSR camera. The first camera I ever bought was a Canon eos 1200d, I couldn’t take to it at all. So one day while scrolling through Facebook I came across a page called DJI Drone Photography, that’s when it all changed and the drone came into play. I remember seeing tons of awesome aerial photographs from all over the world and thinking I’d love to give that a go! So I had purchased my first drone, a Phantom 3 Standard, crashed it on the first day (as you do) but didn’t give up! I remember heading down to Lough Neagh to practice and was getting the hang of it very quickly, I also outgrew the drone very quickly and moved onto a Phantom 4, then onto a Phantom 4 Pro.
Previous
Next

In 2018 i decided to photograph the remaining WW2 Éire Signs which are dotted around the Irish Coast. There was originally 83 of these signs so i knew it was going to be a big challenge! Basically these signs were an early form of GPS to alert allied pilots that they were flying over neutral Ireland during WW2. Each sign was numbered, each air crew had a map with the numbers so if they did become lost, it was only a matter of spotting an Éire Sign on the ground and cross referencing it with the number on their map. The whole project took about 13 months to complete and there was 41 out of 83 signs documented which isn’t bad going! Here’s some info…

What were they used for?
The Éire signs were built as neutrality markers to alert World War Two pilots as they were flying over Ireland, a neutral Country. They had been built by the volunteers of the Coastal Watch Service, that had been in operation since 1939. The Coastal watch were made up of local men, whose job was to record military activities they had observed along the coast. They recorded any activity into a logbook. (some logbooks can be read online Home | Military Archives) and they were to report any aircraft/submarine sightings via telephone.
Coastal Watch Service
The Coastal Watch were stationed in modest looking buildings called Look-Out Posts (LOPs) at 83 locations, five to fifteen miles apart along the coast of Ireland; starting at no.1 Ballagan point in Co.Louth to no.82 at Inishowen Head in Co.Donegal. Number 83 at Foileye Head in Co.Kerry is the only LOP not in sequence, as it was added at a later date to the rest. Many of the LOPs were situated on former Napoleonic Signal Tower Sites. As i was locating the markers, i would often spot both buildings; the modest looking Look out post and the Napoleonic Martello towers near the Markers, some LOPs like the one i had encountered on Valentia Island used a refurbished Martello tower as their base.
Éire Signs/Neutrality Markers.
The Éire signs were added 1942-1943: A need had arose for them, as the number of sightings of aircraft were increasing steadily during the war and there had also been a number of crash landings in Ireland. The signs were placed close to each LOP and shortly afterwards at the request of the US airforce the number of the relevant LOP was added. The signs were originally built to alert pilots that they were flying over Ireland which was neutral as opposed to Northern Ireland which was not. Whilst travelling around locating the markers i could see just how important the markers must have been, especially in places like no.82 at Inishowen Head; where Northern Ireland and Ireland are just separated by Lough Foyle. The numbers added to the signs transformed them into navigational aids (an early form of GPS if you will) as a map of the numbered LOPs was then given to allied pilots so that the signs could then be used as a way to find their bearings, if they became lost or disorientated. This was an attempt to try and reduce the number of crash landings in Ireland. Despite this 16 crashes still occurred, but at least one plane was able to reorientate themselves using the markers and were able to navigate to Shannon Airport. To make the signs visible to pilots they were made out of local rock, cemented into place and white washed. They had to be a standard size of 12m by 6m surrounded by a wide rectangular border. These were given an aerial inspection by General Hill of the US Airforce based in Northern Ireland and the Chief of Staff of Ireland, General McKenna. Any signs that were too small the Coastal Watch were instructed to make bigger to the standard specifications. One such example of this at 48 Éire in Co.Clare. A photo captured clearly shows two Eire signs next to each other, one sign significantly larger than the other.
End of the War.
Once the war was over, there was no longer a need for the Éire signs or the Coastal Watch Service, They had served their purpose during the war. The service was disbanded and many of the signs were removed if the land was arable or they were recycled to be for used for walls etc on farmland. Most were abandoned and subsequently overgrown by gorse and vegetation. This is what happened at No.8 Bray Head Co.Wicklow. Forgotten until a gorse fire revealed it in 2018. Of those that remain, we found that they were mainly inaccessible headlands unsuited to farming along the west coast. They were also remote areas, which is probably why, despite many of the signs surviving they were largely forgotten about, at least as a collection. Many locals know about their own Éire sign in their area and quite a few have been maintained or restored; like those on Malin Head, Crohy Head, Achill Island and Downpatrick Head, but until the use of drone photography not many people knew so many still existed. 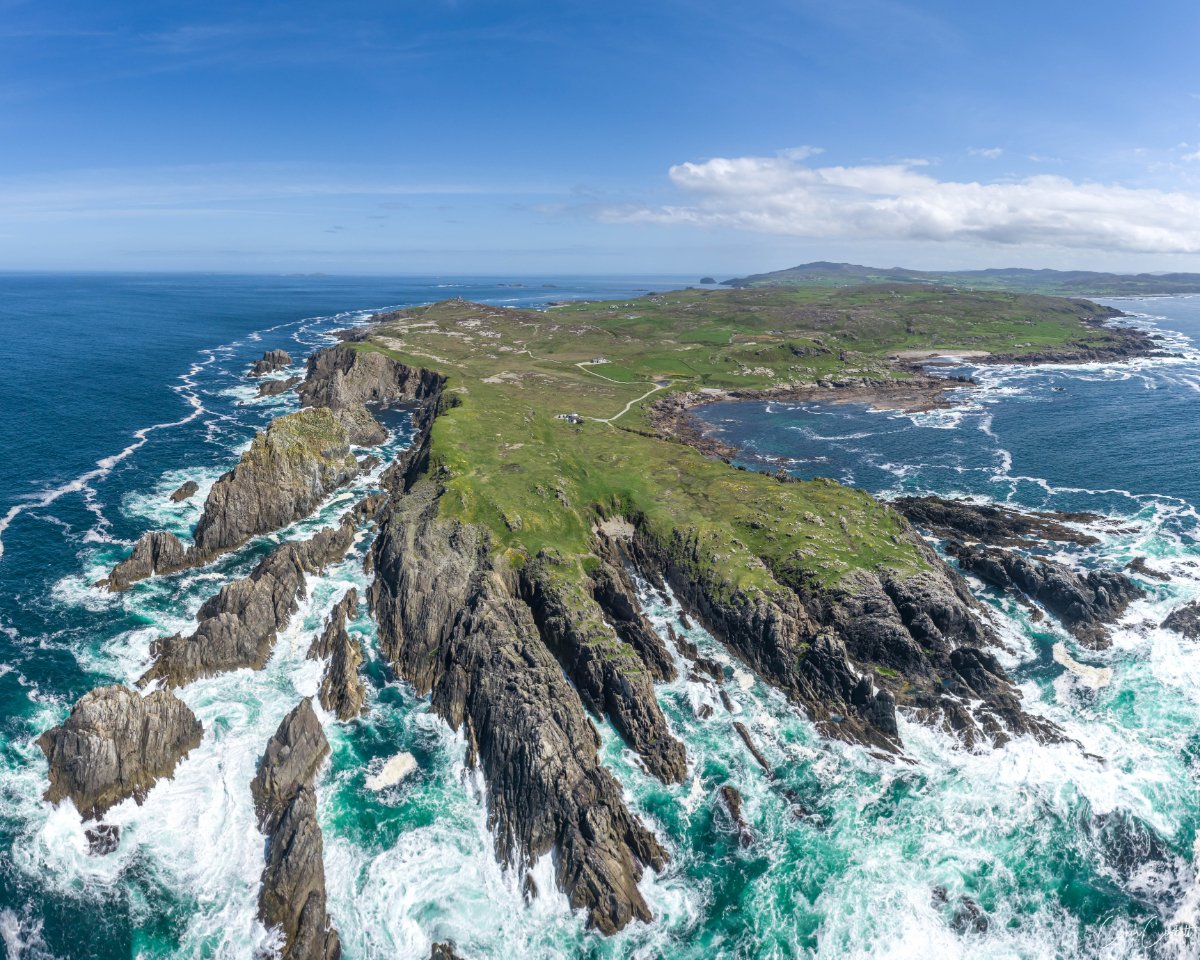 The worst one would have to be almost losing the drone at Murder Hole Beach in Co.Donegal. I had flown in from the roadside near Tra Na Rossan Bay and over the mountain into Murder Hole, just as I had the image in frame the drone started to spin 360 degrees and at a fast rate. At first I thought a gust of wind had caught it or had lost GPS, but everything looked ok on the screen. So here I was, hoovering over the ocean, still in a 360 spin and constant beeping coming from the controller. Something was seriously wrong here. I managed to work out that I could correct it and had some but little control. Imagine driving a car that wants to constantly go left but you want to go straight, you need to battle with the steering to keep the car in straight line, right? That’s how it felt. So now the plan was to get the drone back to the roadside without crashing or ditching in the ocean! Meanwhile while all this happening the battery level is dropping so I had to act quickly. The plan was to fly low and over land, I had picked out a rough route with my eye, if I did have to ditch, a hike is better than a swim! Safety was important too, there’s people walking on the beach so stay away from there. To cut a long story short I did manage to guide it back to area, still in a 360 spin and still battling. I couldn’t land it or hand catch it so a gentle ditch on the hill behind me and it was all over. I think the moral of the story is expect the unexpected, things do go wrong. It’s important not to panic, take in your surroundings and public safety is always first! I later found out that the rudder stick on the controller had developed a fault.

Sunset simply because i like my lie ins! Also it allows more to time for planning and not as rushed.

It has to the the Wild Atlantic Way! From Donegal to Cork. I love the coast, love the barren landscapes and love the dramatic cliffs and coastline Ireland has to offer! I am a firm believer that the sea has a calming effect on the soul… I also love the challenge and thought process that goes into aerial photography. It really is a different perspective from the air, you learn to appreciate the beauty of Ireland. I also love the historical side of things, the county is steeped in history! From Castles to Ring Forts, Martello Towers, old WW2 lookout posts and of course Éire Signs! For me it’s also a history adventure as well as a photography one!

It would have to be an image I captured of Grianan of Aileach in the summer of 2018. It was a nice sunset and a young couple were sitting on the wall taking in the views and watching the sun go down. Anyone who knows of Grianan of Aileach, will know that the views from the fort are fantastic, especially on a clear evening with a nice sunset! I think it should be on every couples bucket list for 2021. 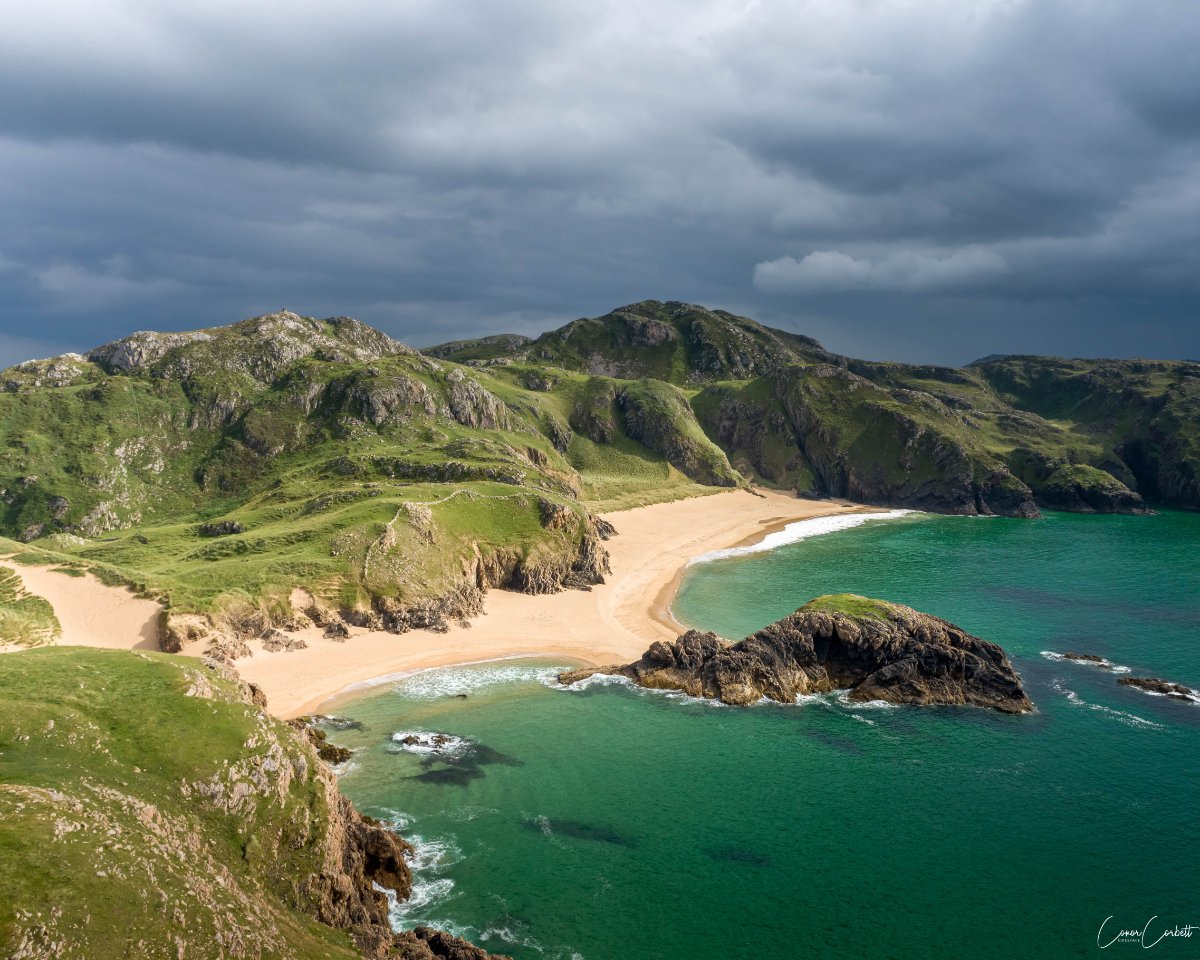 Phantom 4 Pro. I usually carry two if I am away in Cork for example. If something goes wrong I still have a backup to continue on.

Keep at it! I am in no way a professional, just a very keen hobbyist but photography can be a mine felid at times, it can be very daunting trying to get the hang of settings, light, exposure etc… I think it took me about a year to finally ditch auto and go full manual but I was worth every bit of struggle! Believe in yourself and you’ll succeed! Also live the adventure, photography will take you places you’ve never been before, it will help you get motived! Don’t be afraid to roam, go off the beaten track, take the back roads and just get lost! You’ll soon see that all is right with the world. Photography has helped me keep an active mind, it’s brought out the adventurer in me and I’ve met some awesome people along the way! It’s also good for the headspace, so take it all in and enjoy every moment of it!

Again never give up! Have faith in yourself and your abilities and the rest will fall into place. In the words of Gareth Wray… “I am a firm believer lad, if she goes down, she goes down doing her job!” 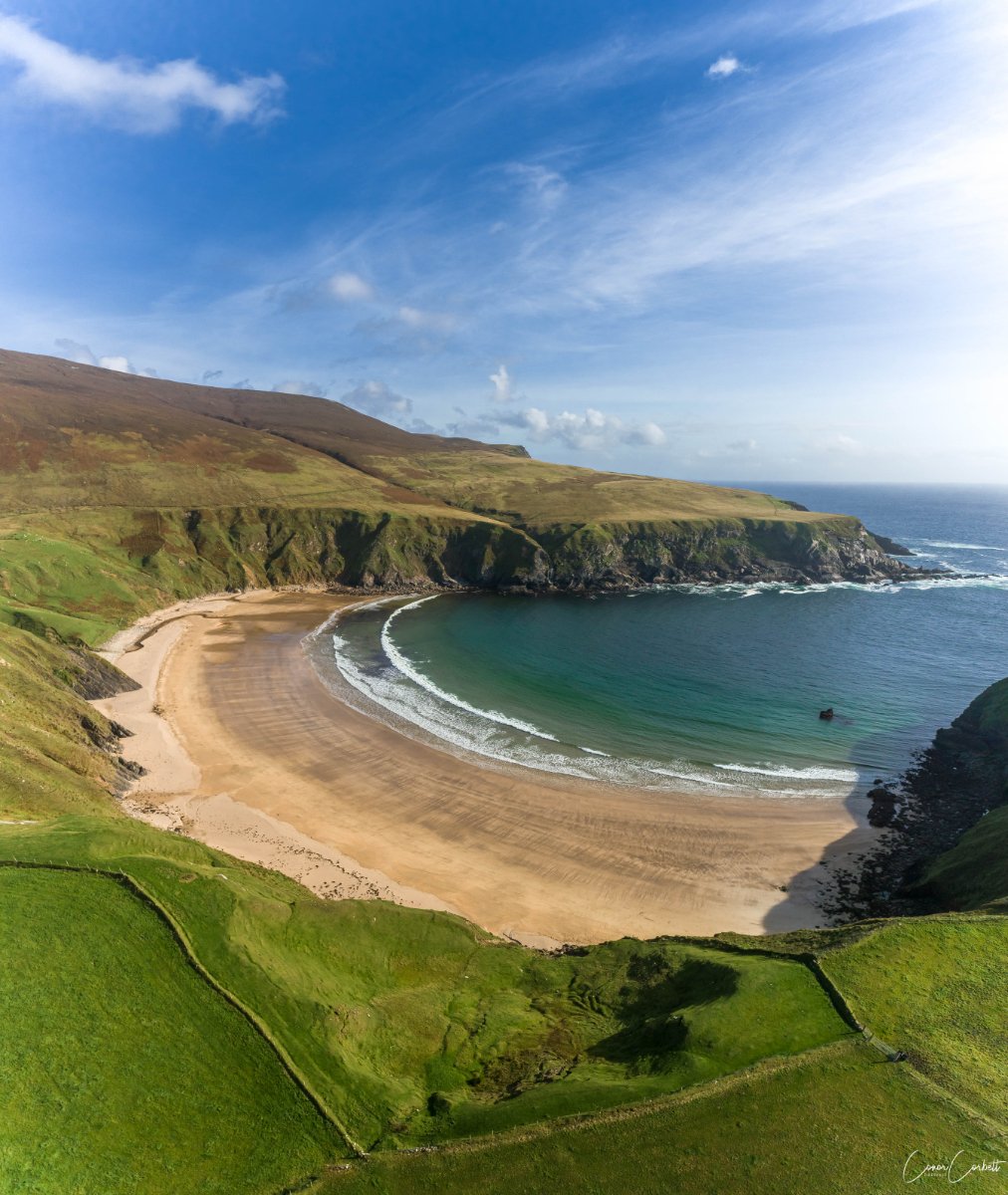 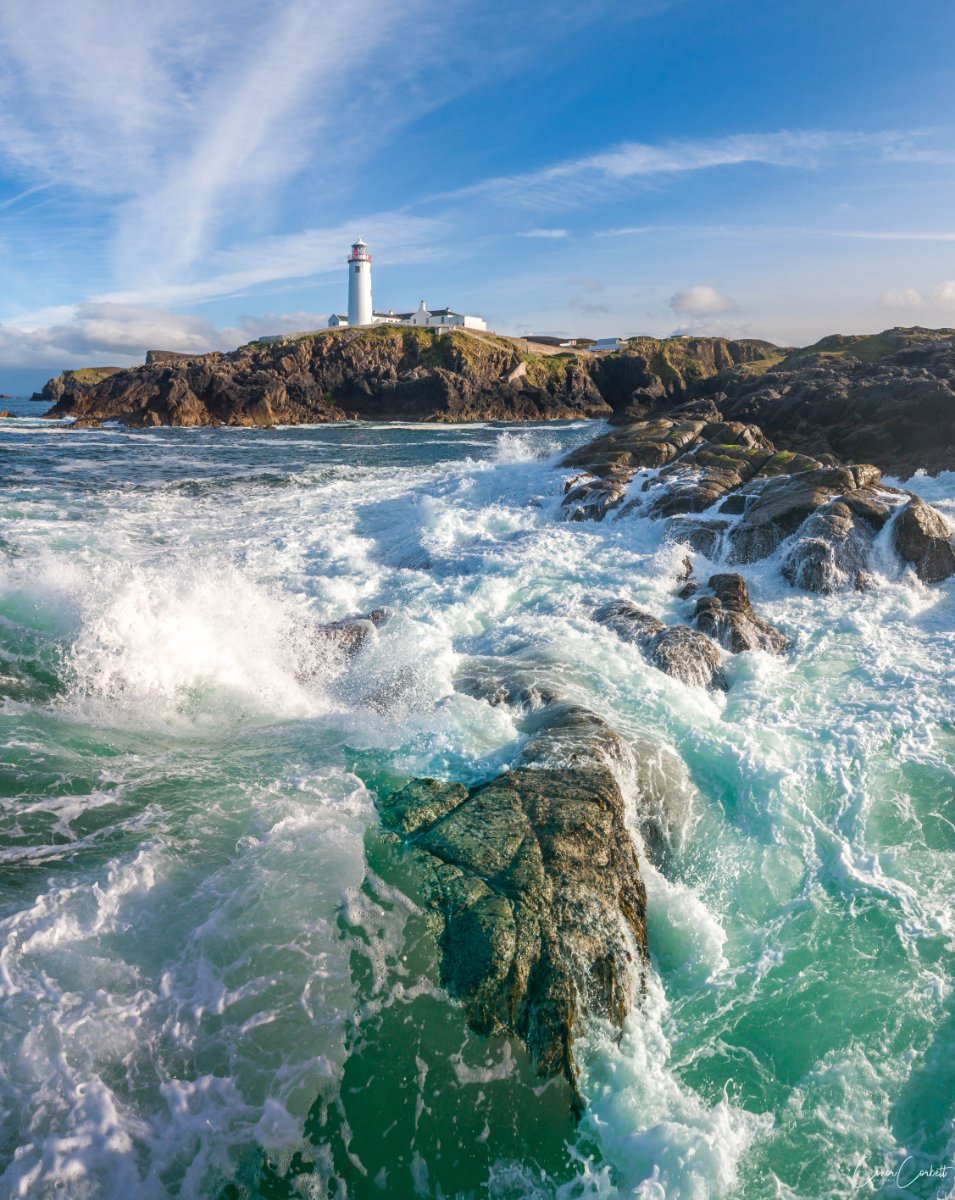 Who is your biggest inspiration as a Landscape Photographer?

At the moment I am just happy that I’ve found a hobby that I enjoy, it’s great to get out and about and meet new people. There’s probably still a lot to learn so who knows where it will take me! I think I am just happy to be part of one big adventure.

Too many to list! Each and every one of you guys and girls are doing an awesome job of showing the world how beautiful Ireland really is. Keep it up!