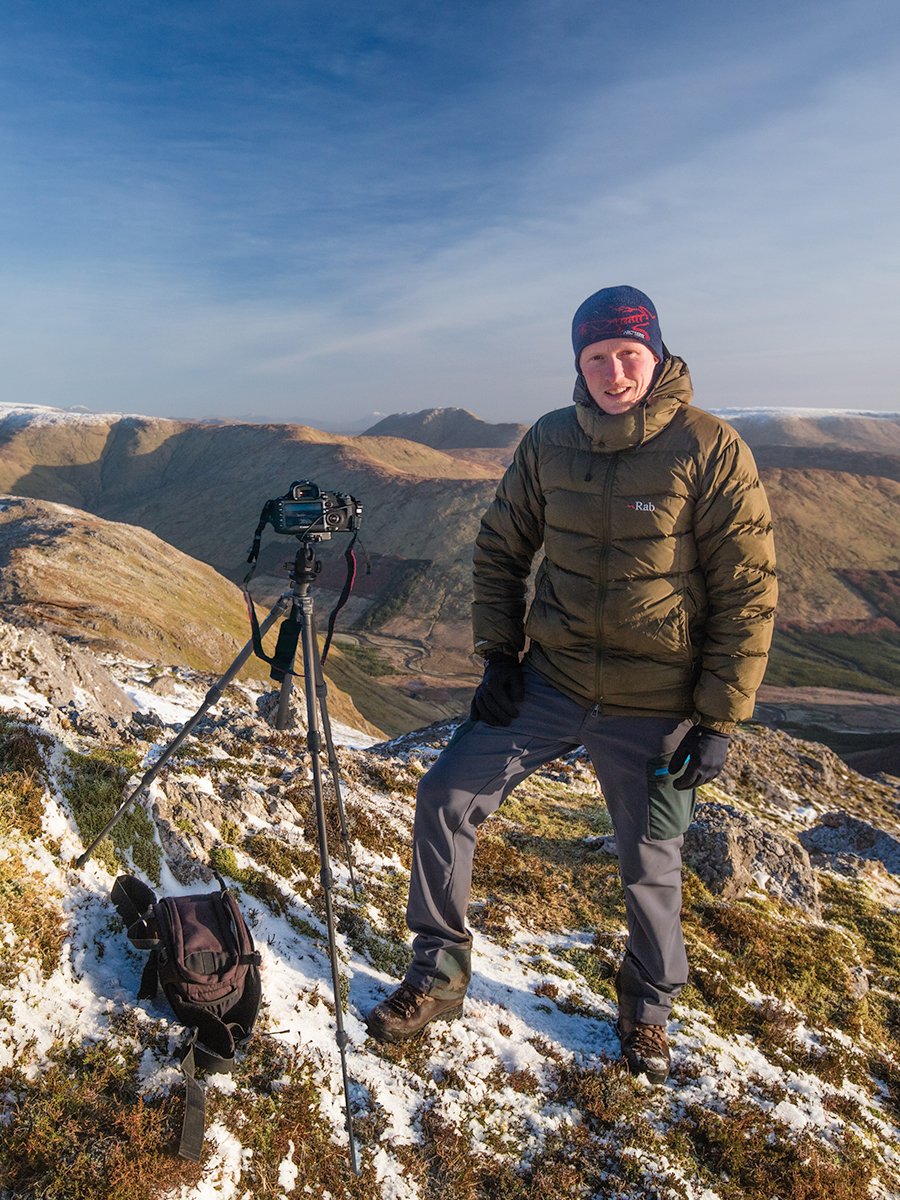 I’m a landscape photographer, originally from County Tyrone but now living in Enniscrone, County Sligo with my wife Helen and two children Erin and Geordan. I’ve been full time since the late 90s but I’ve always tried to make it a means to an end so I have the flexibility and freedom to enjoy the outdoors on my terms. Although I started out as a climber I now spend a lot of time surfing and I also love road cycling and mountain biking.
Instagram Link

I came across a book by the late American landscape and adventure photographer Galen Rowell in a bookshop in Pokhara, Nepal in 1995. It absolutely blew my mind and from that moment I knew what I wanted to do as a career even though I knew virtually nothing about photography (the hubris of youth!). I picked up my first proper camera, a Canon 630 with a basic kit zoom lens a couple of months later and drove around Australia with a copy of Rowell’s Mountain Light and a few rolls of Fuji Velvia. That was the beginning and I was very fortunate in my early years to be in the right place at the right time to establish a business. The Canon 630 didn’t last long, and it was a Nikon setup that saw me through the analogue years. I switched back to Canon when I moved to digital.

These days I do as much video work as stills, and that has been a really amazing learning curve – getting to grips with the bewildering technicalities of video work makes stills seem really simple. Most of my business these days is commissioned work but I also still licence stock and sell prints. I do a small number of landscape photography workshops and tours each year which I really enjoy. Landscape photography can be such a solitary pursuit it is wonderful to spend a few days each year travelling with other photographers, seeing other peoples vision and sharing stories and ideas.
Previous
Next

I think one of the most enjoyable days I’ve ever spent with my camera was driving around the northwest coast of Mayo in February 2014 during a particularly intense Atlantic storm. The waves generated by that storm were some of the largest ever recorded, so with or without a camera it was a privilege just to witness the immensity of all that energy unloading itself on one of the most rugged stretches of Ireland’s Atlantic coast. Trouble was that it was virtually impossible to shoot from outside the car – the wind was gusting over 100km/h in the squalls with heavy rain and hailstones. I ended up at Dun na mBó looking out to Eagle Island Lighthouse which lies about a mile offshore. I managed to angle my car so that I could sit and shoot from the passengers seat with a 100-400 lens all the way out at 400mm, lowering and raising the window as needed. I actually rigged up my tripod in the car with the legs splayed out, not for stability because the car was rocking around in the wind, but so that I didn’t have to take the weight of it all the time. I got one frame, in between squalls, with a wave exploding right over the back of the lighthouse. The light on Eagle Island is around 220ft above sea level, so the spray from this wave was probably at least 280ft high. It became a very successful image for me, appearing in the Irish Times and selling a lot of image licences and prints. Enda Kenny used it on his Twitter page while he was Taoiseach – his Grandfather was lighthouse keeper there. Unfortunately the Commissioners for Irish Lights modernised the light the following year, basically decapitating the whole glass dome and ruining much of its aesthetic appeal. The following year I had a similar shoot from a location looking across Broadhaven Bay to Ballyglass Lighthouse and basically every winter now I’m on the lookout for big storm and swell events to shoot. 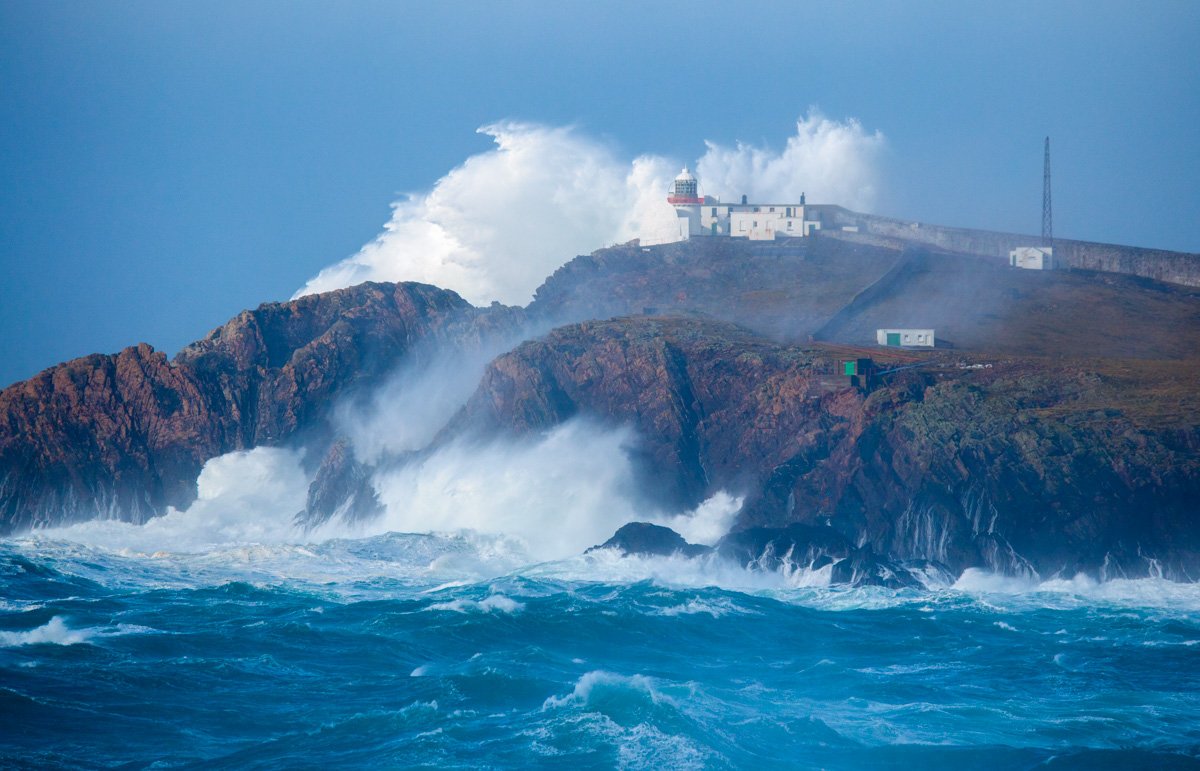 Surprisingly after over 20 years as a photographer I don’t have any really awful stories. I’ve dropped my fair share of lenses, lost plenty of filters and lens caps, mucked up plenty of shots. I’ve never actually had a camera body or card fail on me though. I had a Nikon 80-200 f2.8 lens that I dropped twice: onto a concrete floor in Nepal, and into a rock pool on the banks of the Etive River in Scotland. It survived both – a testament to the build quality of that lens at least.
Perhaps if I had to single out one incident it was probably when I was charged by a female grizzly during a 3-day hike in the mountains of Glacier National Park in Montana. I had inadvertently walked between the bear and her cubs – probably the worst thing you can do to provoke a bear. It was all over in seconds but it was an experience that was both surreal and terrifying in equal measure. About half an hour after that I had another close encounter with a mother grizzly and cub, but this time they just ran. At that stage I was pretty well traumatised! The National Parks people closed the trail not long after that.

Going against the grain here maybe but I’d have to say sunset. I live out west so a lot of locations suit evening light better – at least for my style of photography which favours a lot of back and side lighting. I’m also not a natural early riser, especially at 5am or earlier. In the evening I find my energy levels are much higher and the creative flow comes to me more naturally. I also love the way the light develops in the evening and for me it seems better suited to progressively working or developing a location or composition. That being said I normally find it worth the effort whenever I do get up for a sunrise shoot, I just need to be very clear in advance what I’m going to do. When I’m on a photo tour with clients we do always make the effort to get up for sunrise if the forecast looks in any way promising, but these trips are normally spring or autumn so the times are much more reasonable. 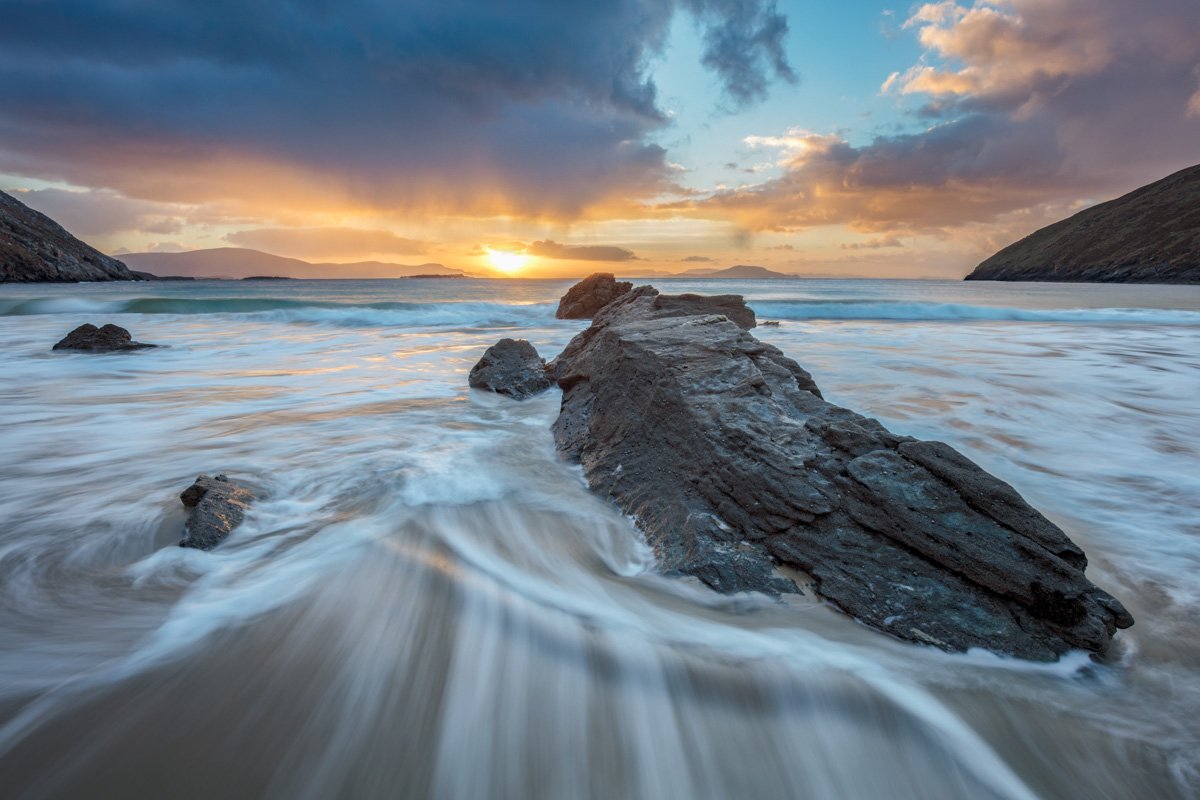 That’s a tough one – I’m kind of hoping I haven’t found it yet! There must still be magical nooks and crannies of the Irish landscape that haven’t been shot. Of places I have shot, Downpatrick Head in County Mayo and Ballintoy on the Causeway Coast would be locations that I always seem to be able to get something new from each time I visit. However I think more than a specific place it is particular conditions I love – beautiful light obviously, but also a sense of energy in nature, whether that is the motion of water, the structure of clouds or even the dynamism in the arrangement of rocks in a foreground. I’m always looking for combinations of these fleeting elements, and I just love it when I can spend a couple of hours in any location like this when there is no one else around – it is truly immersive.

No single image but I do have a soft spot for an image I shot way back around 1998 on Fuji Velvia slide film. Its looking south across Clew Bay towards Croagh Patrick, early winter I think with a really super clear northerly airflow. I’d like to say I shot it at the time knowing that the limited dynamic range would render this high contrast scene in monochromatic tones, but really it was a happy accident and I still love the flow of form in the image. It was also shot on a super sharp lens, and as it doesn’t rely on colour for its success it can compete and not look out of place with my best digital work. In fact if I shot the same scene on my R5 now I wonder if I would end up processing the file to emulate the crushed blacks that Fuji Velvia gave me. 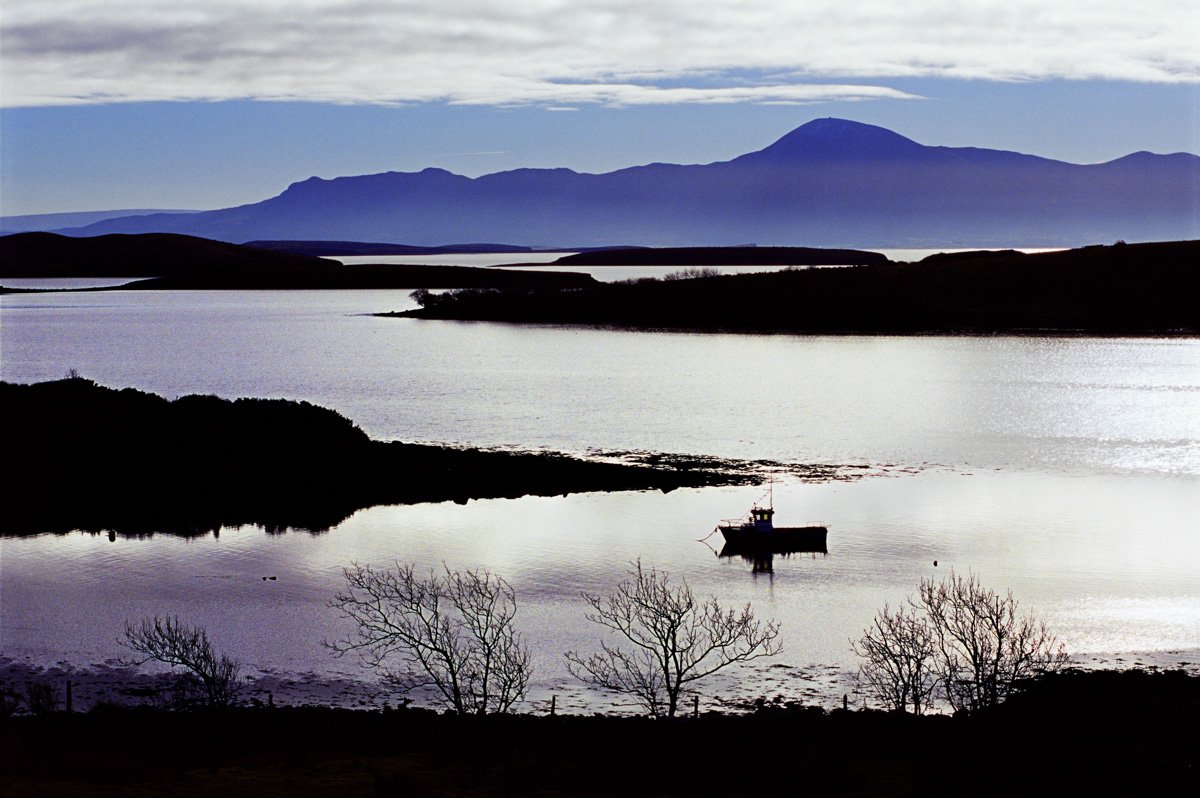 Explore. I mean that on many levels. Don’t just follow around the famous locations looking to replicate a shot you saw on Instagram. It will do very little for your creative development. The greatest weakness I see in beginner and intermediate photographers on my workshops and tours is an inability to look beyond the obvious, to try out unusual perspectives and interesting foregrounds – these often don’t work out, but your compositional skills will grow with the effort. Physical fitness and mobility play a huge part in this too. I’d actually say that staying in good shape is more important to good landscape photography than the dynamic range of your sensor or stability of your tripod, or any number of other techie considerations we tend to obsess about. If you don’t feel comfortable clambering over slippery rocks, or you aren’t fit enough to carry your camera kit far from the car then you seriously restrict the range of options open to you. Also try to do your processing on with a good-sized quality monitor. Many photographers starting out try to do their processing on a laptop which is not ideal. 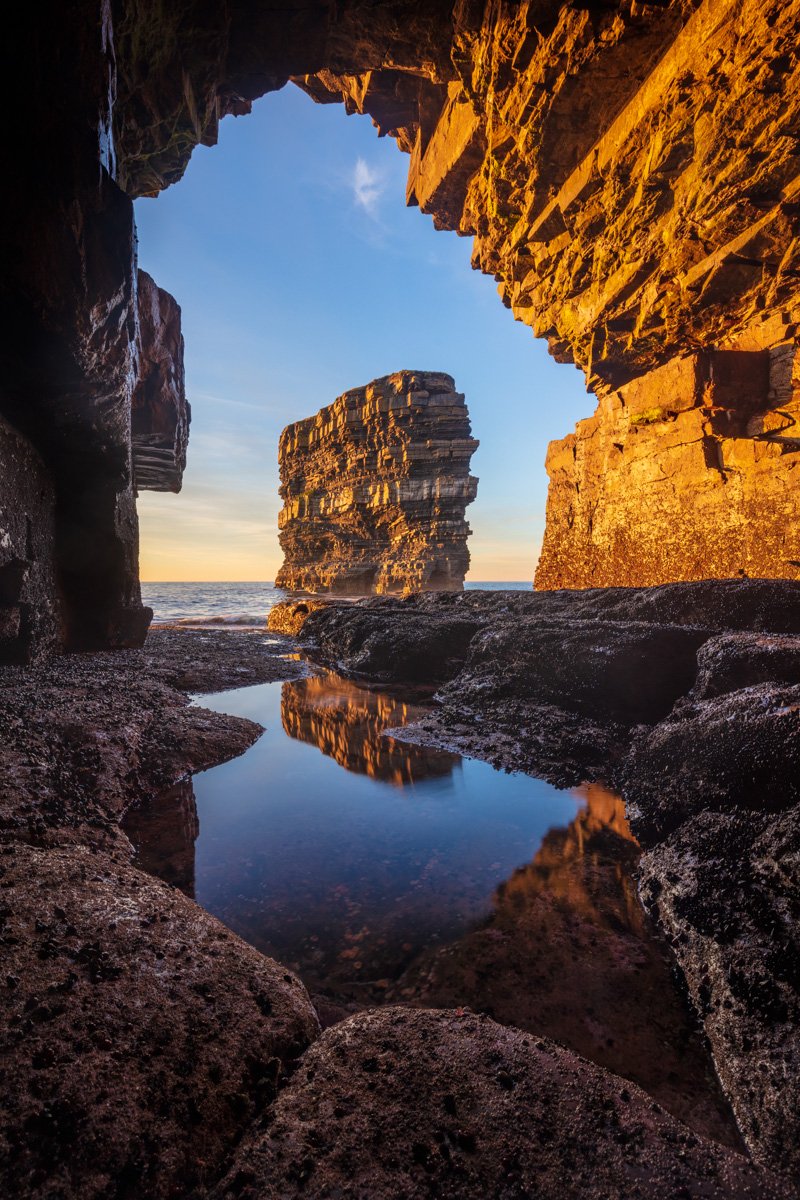 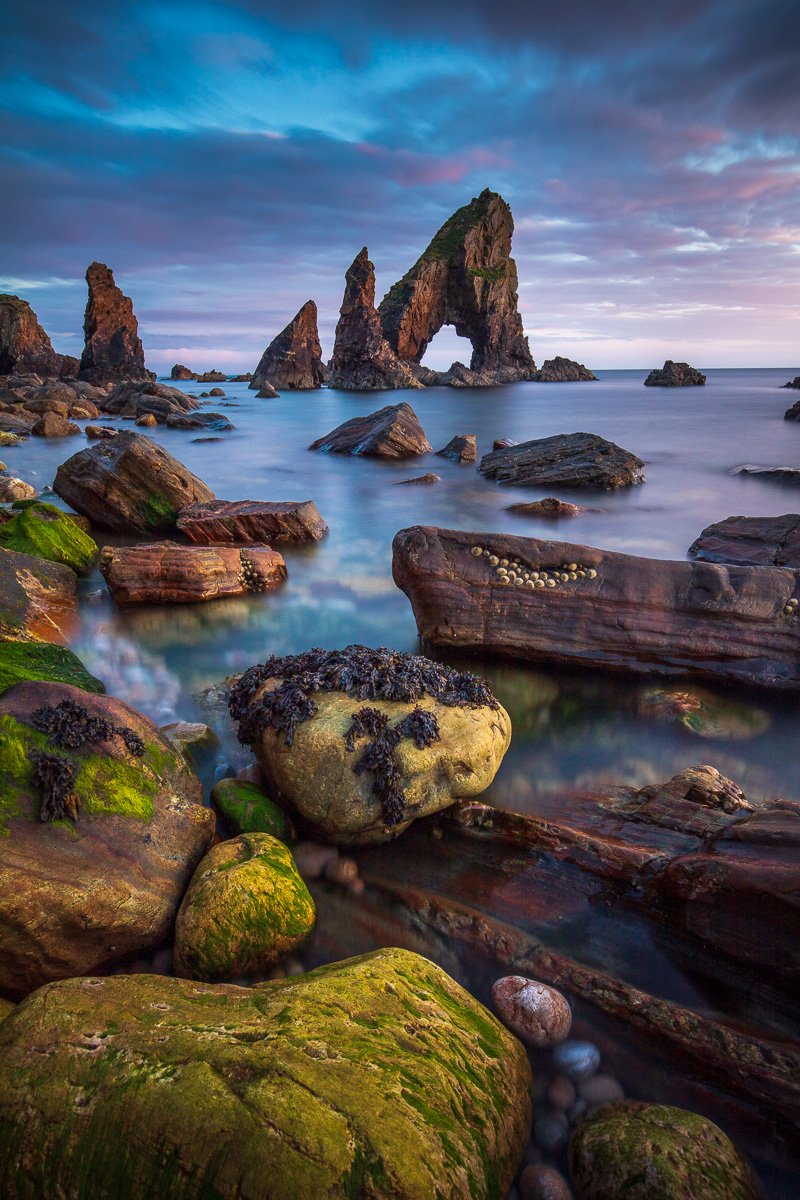 It’s going to sound like a cop out but I don’t have one – there are so many excellent Irish shooters with different styles that it is impossible for me to say. Also I do try to limit the time I spend on social media and looking at other people’s work. After a while it can become overwhelming and a negative influence. Galen Rowell was certainly my biggest influence and inspiration when I was starting out and his writing on phootgraphy is still very relevant today. In Ireland during the film epoch there were only a handful of full-time photographers doing landscape work like Peter Zoeller, Chris Hill and Liam Blake. I’m still bemused when I turn up at a location and there are other people with tripods there – its amazing really but great to see because it is a really healthy way to spend time both physically and mentally.

Instagram Link
© All images are copyrighted to Photographer Gareth McCormack