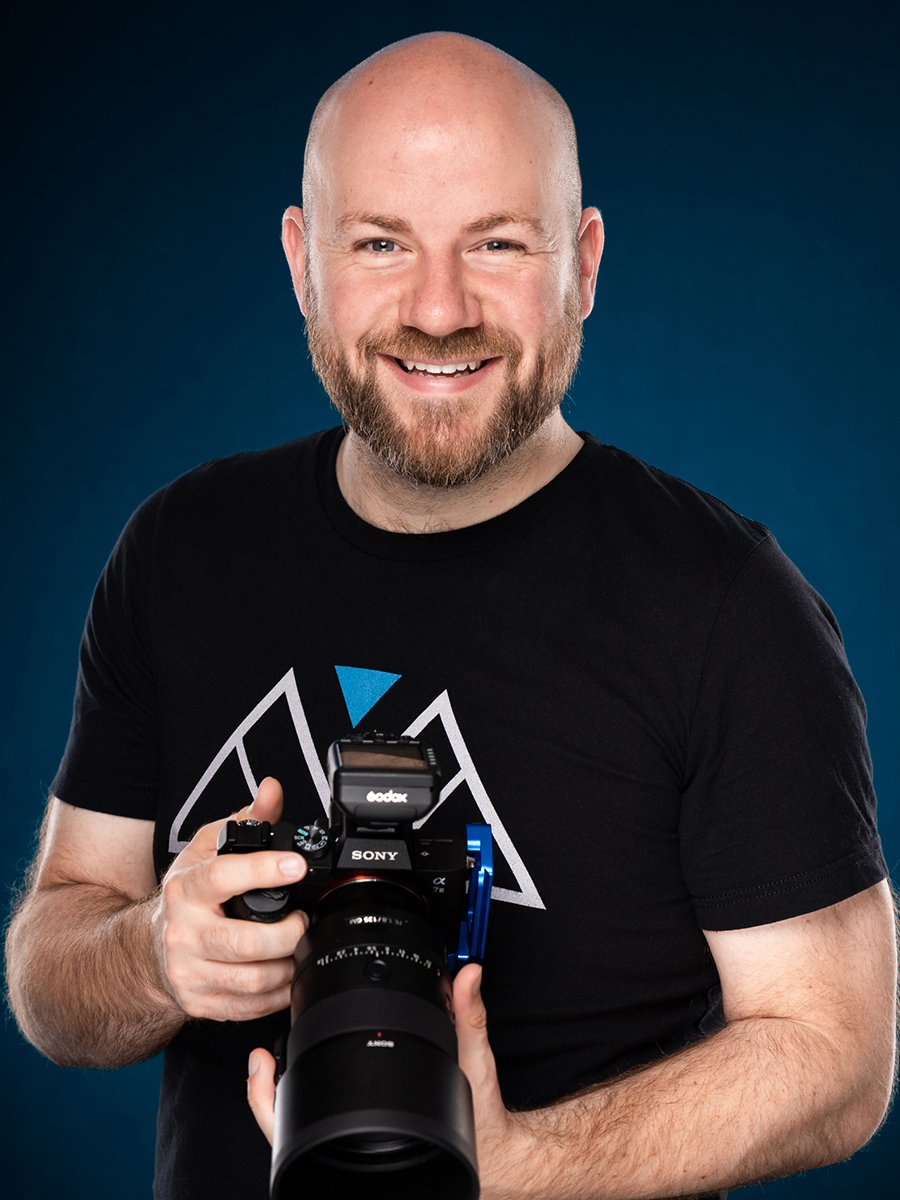 I’m a full time commercial and landscape photographer based in Dundalk, Co. Louth. I got into photography initially to showcase my hometown and to improve my editing skills for working on composite imagery in my graphic design job.

Instagram Twitter Facebook Youtube Link
This quickly developed into an absolute obsession for me and photographing landscapes soon turned into a want to explore all aspects of photography which has now taken over me. In 2020 I went full time as a commercial photographer and technically, I haven’t worked a single day since.
Previous
Next

Dundalk has a bad reputation for being a bit of a kip if I’m honest, so I spent 6 months recording a timelapse/hyperlapse project of all the heritage sites I knew of at the time around the Dundalk area with a GoPro to showcase what we have to offer. This struck a chord with people and the video had 25,000 views in the first 3 days of posting it on Youtube. Next I knew, photographers like Conor McEneaney were sending me links to adverts.ie of cameras I should consider to get and try my hand at photography and get away from using GoPros. January 2016 was when I bought my first camera, Canon 650D with 18-135mm f3.5-5.6, 40mm f2.8 pancake, 85mm f1.8 and a small bag, all of which I sold for more than I bought them for and I bought a second hand Tokina 11-16mm f2.8 and a Manfrotto 055c tripod. As I was already lead designer for BoyleSports I had the skills for editing down, so I just needed to learn the mechanics of photographing. This made me then ditch any auto feature in a camera for the next 3 years, even for some of my behind the scenes photos I would use manual focus. To this day, all of my landscape photos are shot with manual focus. I posted my first photo online in March 2016 and have been practicing and working to better myself ever since. I’ve since revisited this Dundalk Timelapse and expanded on the idea twice, first occasion by releasing my own book about the heritage of Louth entitled Louth Rediscovered and the second, most recently, I spent 7 months videoing a timelapse of most of the heritage sites in Louth.

Best adventure was heading down to Wexford with the lads, David Gilford, Ritchie Hogan, Fred Kelly, Nels Ambrose and Keith Meehan for a one nighter to photograph Hook Head Lighthouse. First stop, Fred knew of this abandoned railway bridge and tunnel, so we headed there to shoot some steel wool long exposures. Ritchie has a supple wrist and gets those embers flying, so much so, one hits the front element of Fred’s lens and leaves a slight score mark on the outer side. These things happen but that was just the start of our shenanigans. The tunnel we were in was north facing so we were able to shoot these long exposures during sunset but this was at the end of June 2020, sunset is at 10pm. We leave the area to head towards Hook Head to camp up in the cars, but everyone is hungry and nowhere is open as we are fresh out of lockdown by only a few weeks. We drive for the next hour in search of an open chippie. Eventually we find one, I order the messiest kebab you’ve ever seen in your life and barely get through it.
We arrive at Hook Head, it’s close to midnight now, dark with stormy gale force winds and none of us know how far in the tide comes and where is the best place to park our cars safely. But that doesn’t stop us from getting the cameras out to try and shoot some night shots of the lighthouse. With the winds being so heavy this led to some unique tripod setup styles. Some of the lads opted for hanging their bag off the tripod, others looked like they were doing a press up on the tripod to weigh them down and one of the lads had the tripod legs spread out as far they could go to widen the centre of balance to counter the wind. From memory I think the tripod doing the splits won in that battle against the wind. Failing to get any real decent photo and the realisation that sunrise was in 4.5 hours, we each went to our cars to try and get some sleep. Here lies the problem with me, I struggle to get to sleep on a given night and over the years from playing drums as a freelancer while holding down a full time job, I’ve learned to survive on as little as 3 hours sleep. So I lie in my car, wide awake staring out the sunroof. 2am rolls by and the clouds clear, the wind dies down and I’m not getting to sleep. I get my bag and tripod and away to find a spot to shoot. Now I did try to wake the lads, I stood outside Ritchie’s car shining a light in his face, but he was out for the count. So I went and shot an astro photo of the lighthouse and it ended up being one of my favourite nightscapes in my collection. Sunrise comes close, the lads wake up, we have the craic and I show Ritchie the photo I got, “You W$%&er” is uttered and all the lads come over to see the photo. Turns out, I should’ve knocked their doors til I woke everyone up. But within 30 minutes the lads had forgotten to be annoyed at me as the sky put on a performance and we were all ready to capture it. Hugely bright and full of colour, I think we all nailed some whoppers of photos that morning. 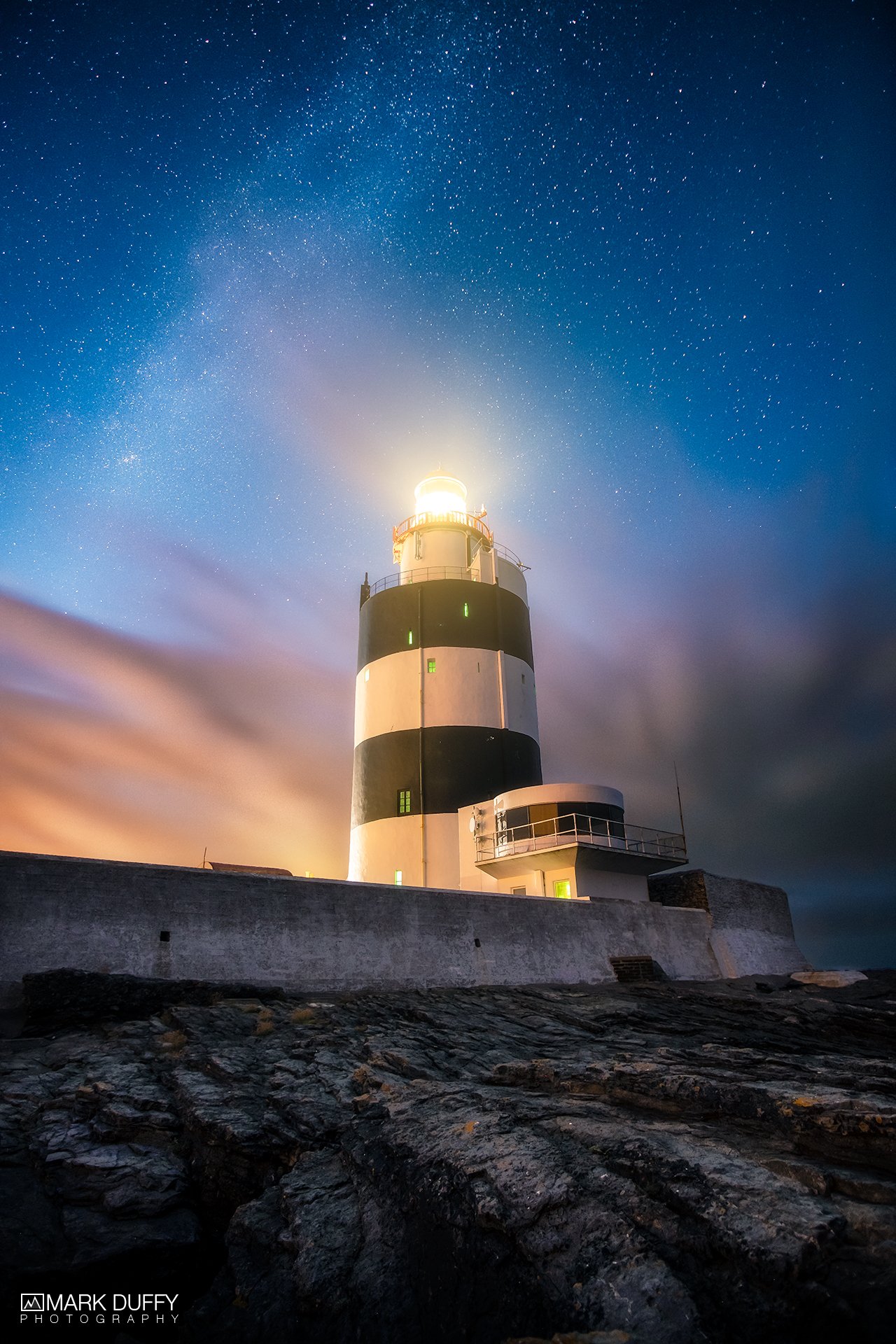 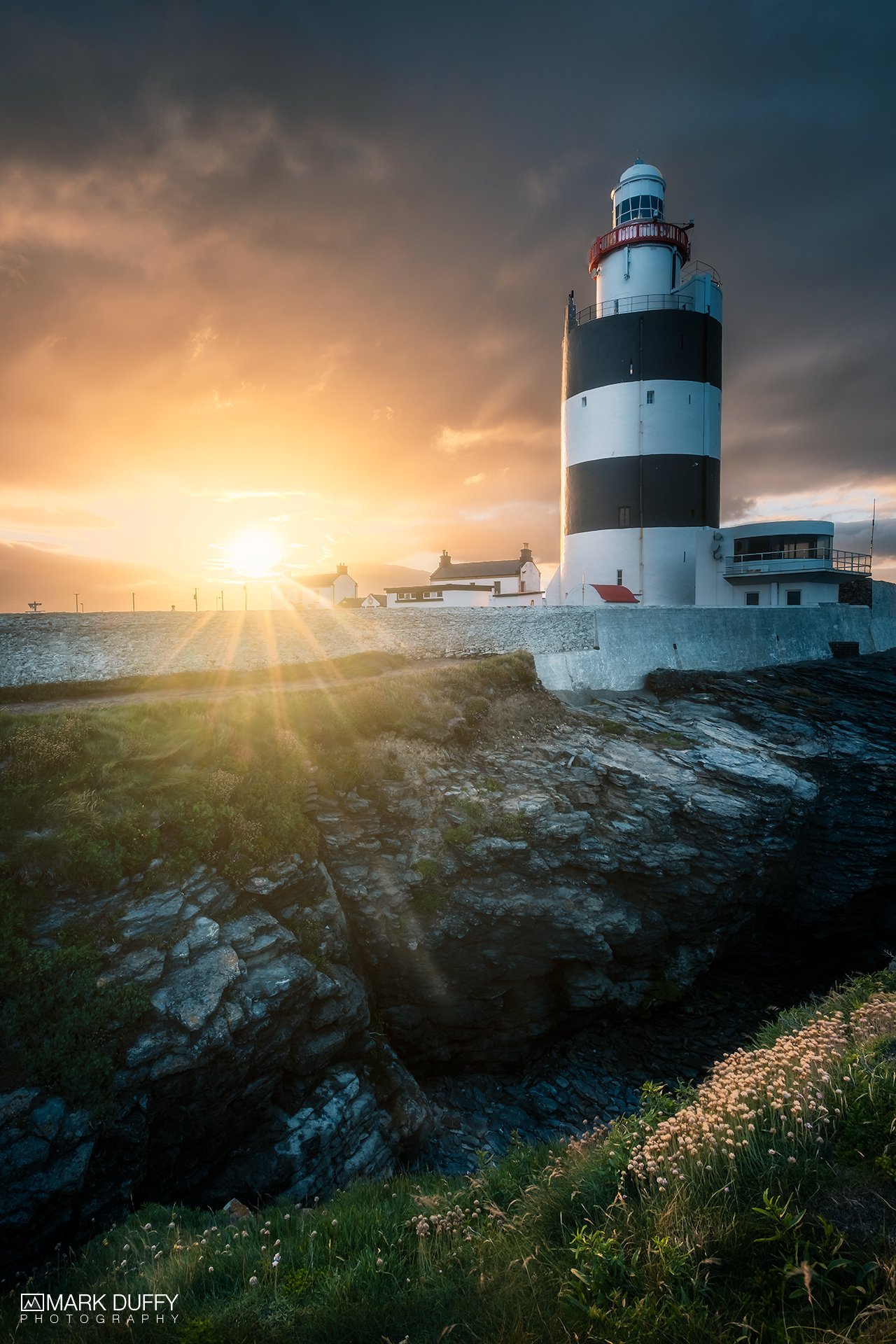 The trip isn’t over, quickly after the spectacular sunrise we just witnessed and shot, the sun disappears into clouds, typical in Ireland, so this put photographing Loftus Hall out as an option as when we drove past. Instead some of us traveled to Dunbrody Abbey but again the conditions weren’t ideal and we were conscious of time as the plan was for us to head to Glenmalure Waterfall Co. Wicklow on our way back home. This is where the lads got their own back on me for not waking them up for the astro photo earlier. To this day I’ve no idea how we got separated, but I ended up driving on my own to Glenmalure waterfall and they wanted to go to the hidden waterfall. All I knew was that I was to head to the Glenmalure Lodge and meet at the car park. I think they took a short cut there or something because I waited in that car park for 1.5 hours, with 0 signal and no way of contacting them. All the while they were down at the waterfall photographing it. I’ve still never been to this waterfall and don’t fully know where it is.

Agreeing to hike up the top of Slieve Bearnagh with Steven Hanna, I took far too much gear and not enough water or food with me. Haha I only took 750ml of water with a small roll and a McVities Classics chocolate bar and we hiked for hours to get to the top. Now I’m not an overly fit guy but I do work out a bit, I was definitely not ready for this hike. Halfway up, Steven decides to tell me that he’s found Slieve Bearnagh to be one of the toughest hikes in the Mourne Mountains, but the scenes were spectacular. As we got closer to the top of the mountain, rain clouds covered us for nearly 2 hours while we hid under huge rocks. Once they cleared, conditions led to a gorgeous sunset. It’s not a great story I know, but I plan my photos to an inch of their life and I’m notoriously known for not even taking my camera out of my bag if the conditions aren’t right for what I want, just ask Ritchie Hogan. 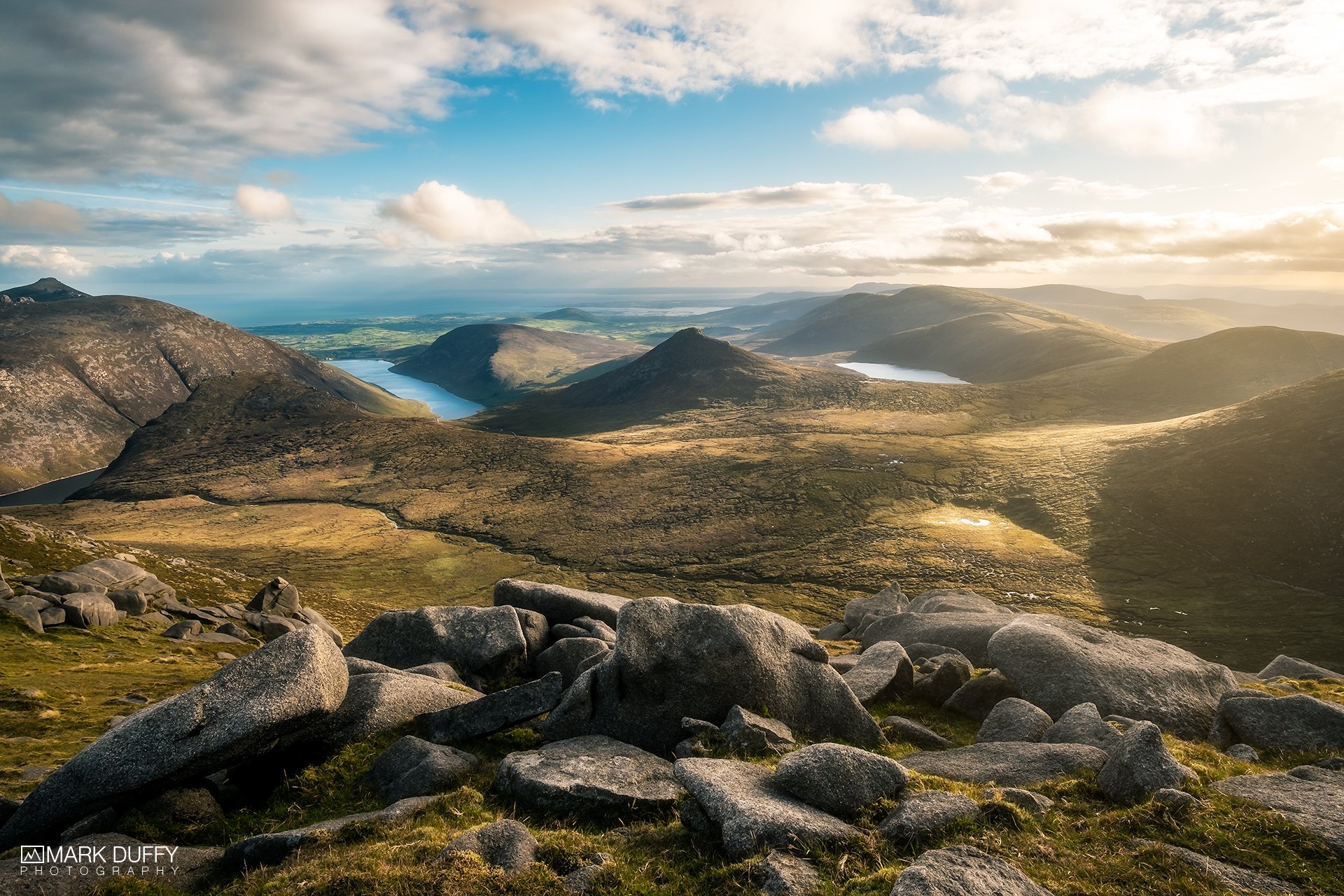 Sunrise because the air is cooler and there is less haze on the horizon so you get so much nicer colours, but these don’t last like sunsets, so they’re even more difficult to plan and capture.

Roche Castle, I’ve been there loads from when I was a kid to now with photography. It has so much to offer in terms of compositions either sunsets and astro, or the less common option for sunrise. 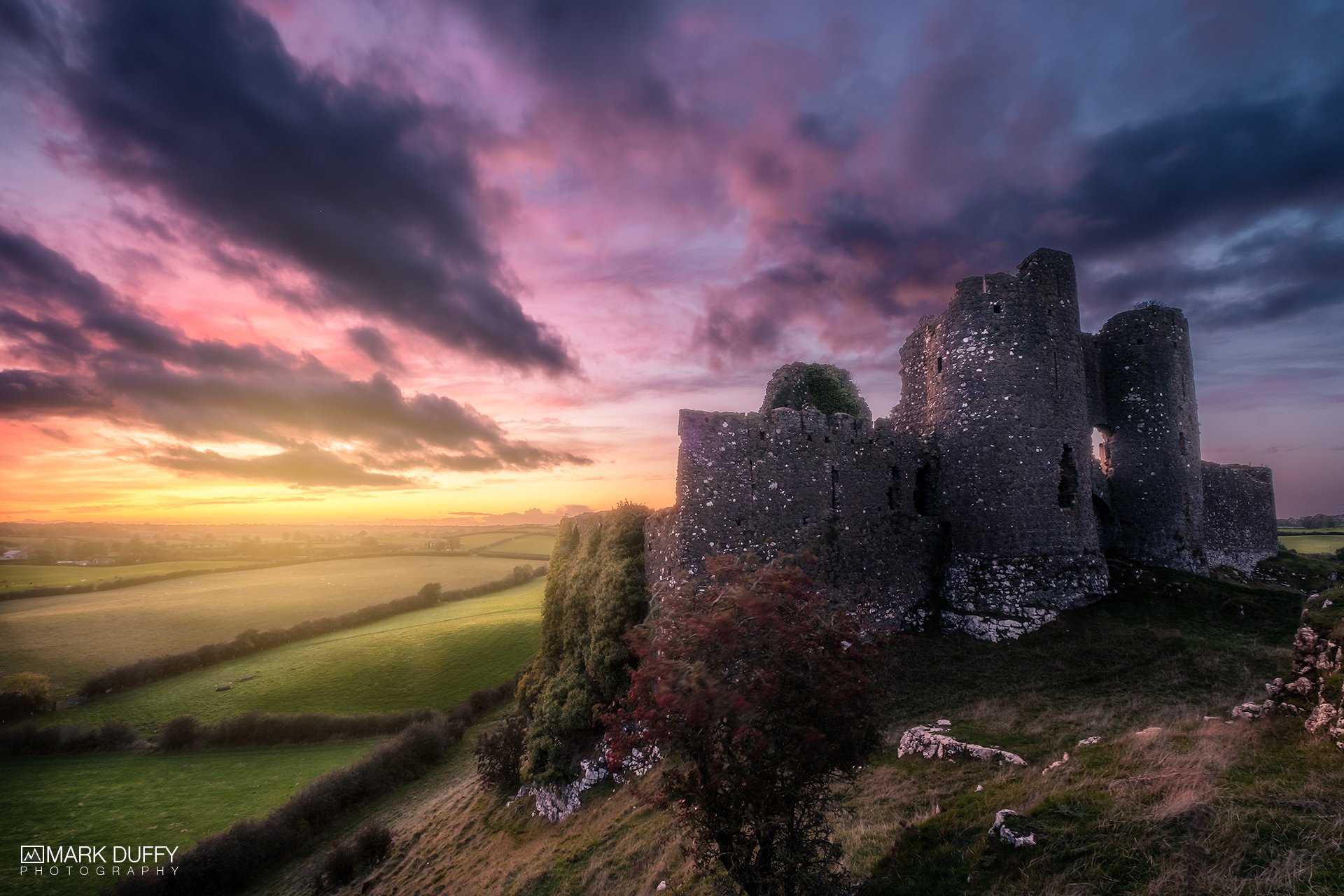 Blackrock Sundial Day to Night
It was a wild concept I had inspired by Mike Kelley and Stephen Wilkes to produce a composite time lapse photo of both the sun and moon rising over the sundial showing exactly what it sees. The perfect alignment of both only occurs twice a year and there’s about a 2 day window to achieve it and it took me 3 attempts over 18 months to get it right. 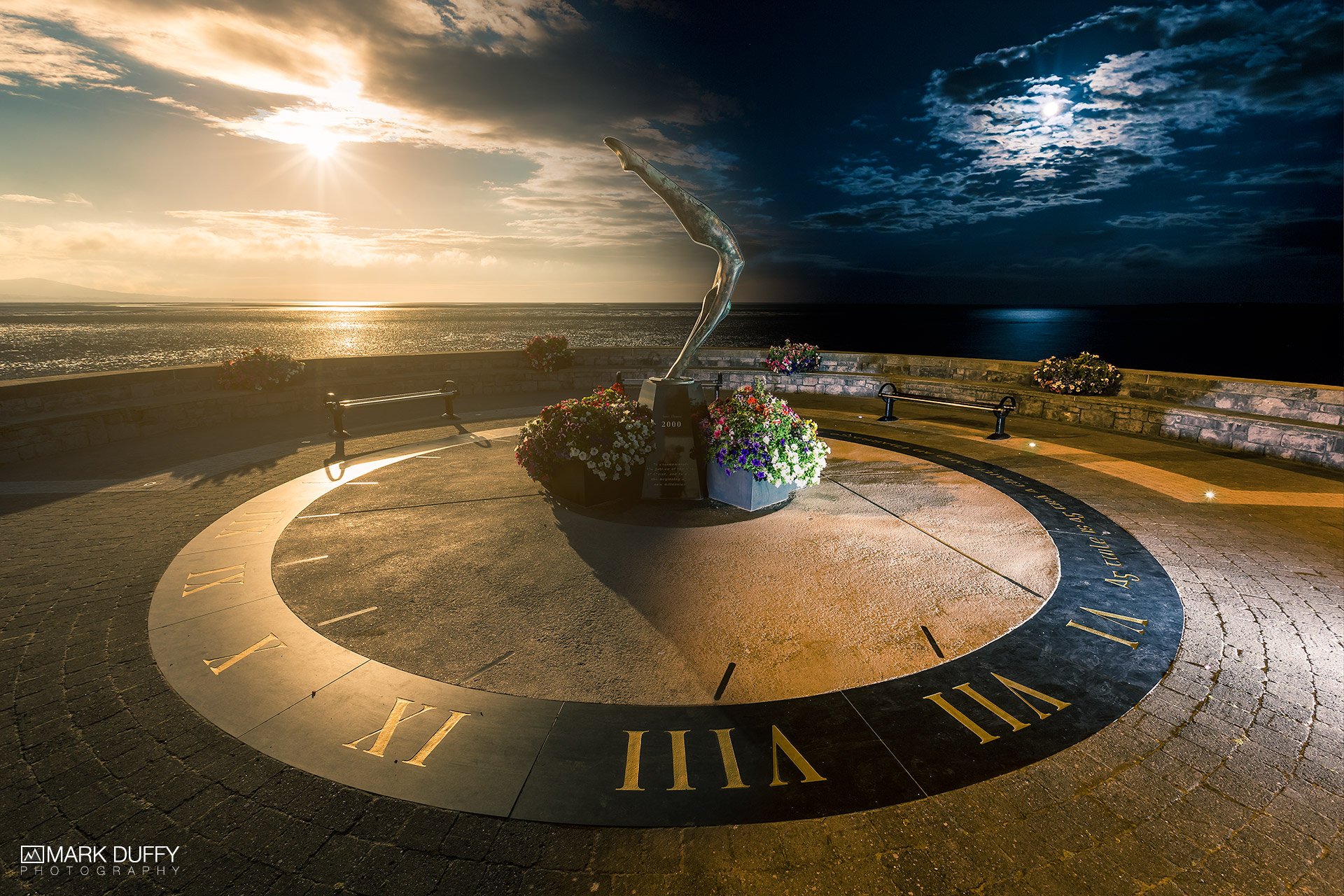 I’ve a wide range of camera gear to suit landscapes, commercial and of course my behind the scenes. And to answer a common question I get, Yes I do use, at times, my Sony A7iii with Sony 135mm f1.8 GM to shoot behind the scenes gear photos. 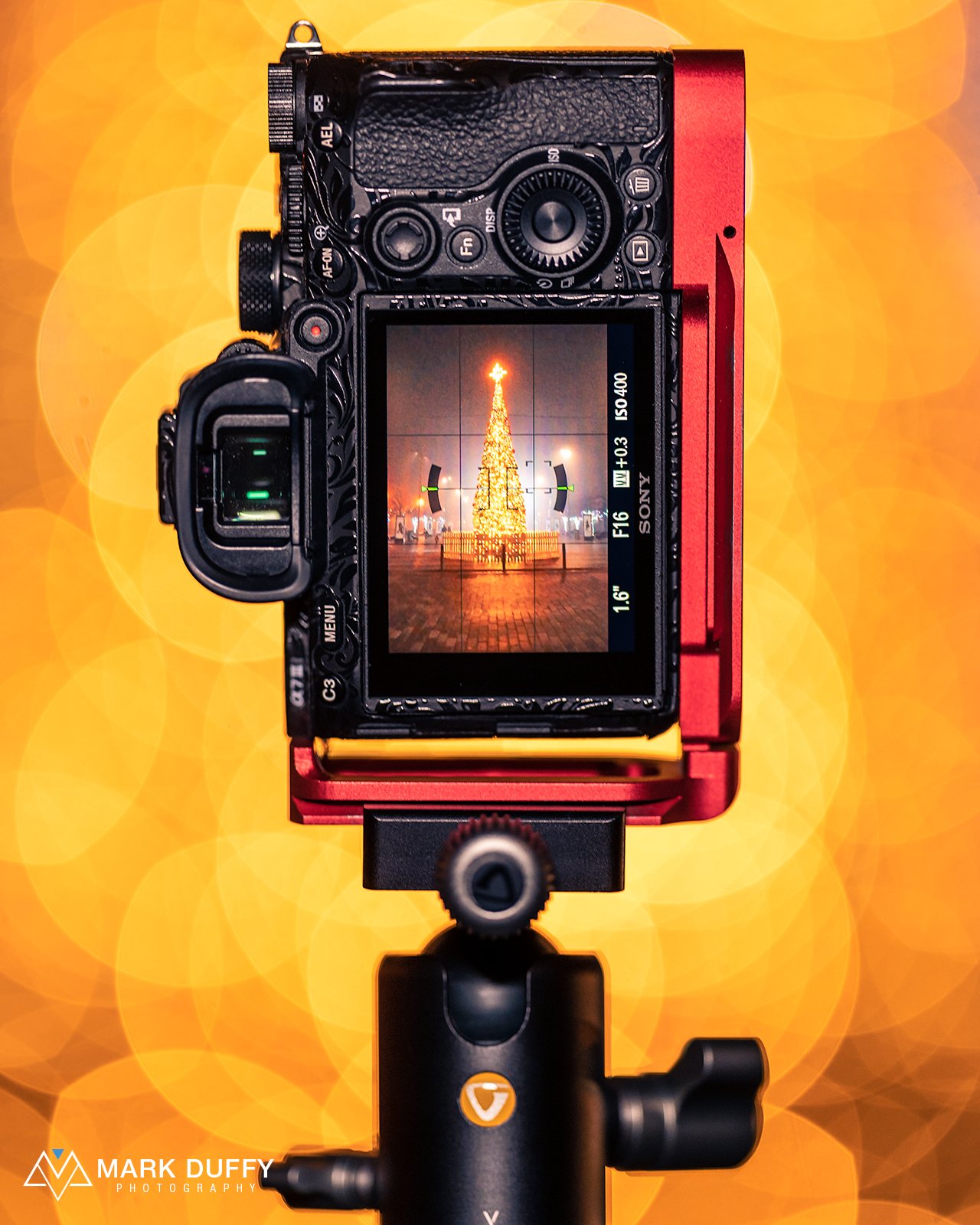 Get out, get practicing. Embrace failure to educate improvement. Don’t be afraid to make mistakes, learn from them. I learned everything I know about graphic design and photography off Youtube, it literally has everything there at hand, you just need to get watching and practicing.

Stick to the rules til you understand why to break them 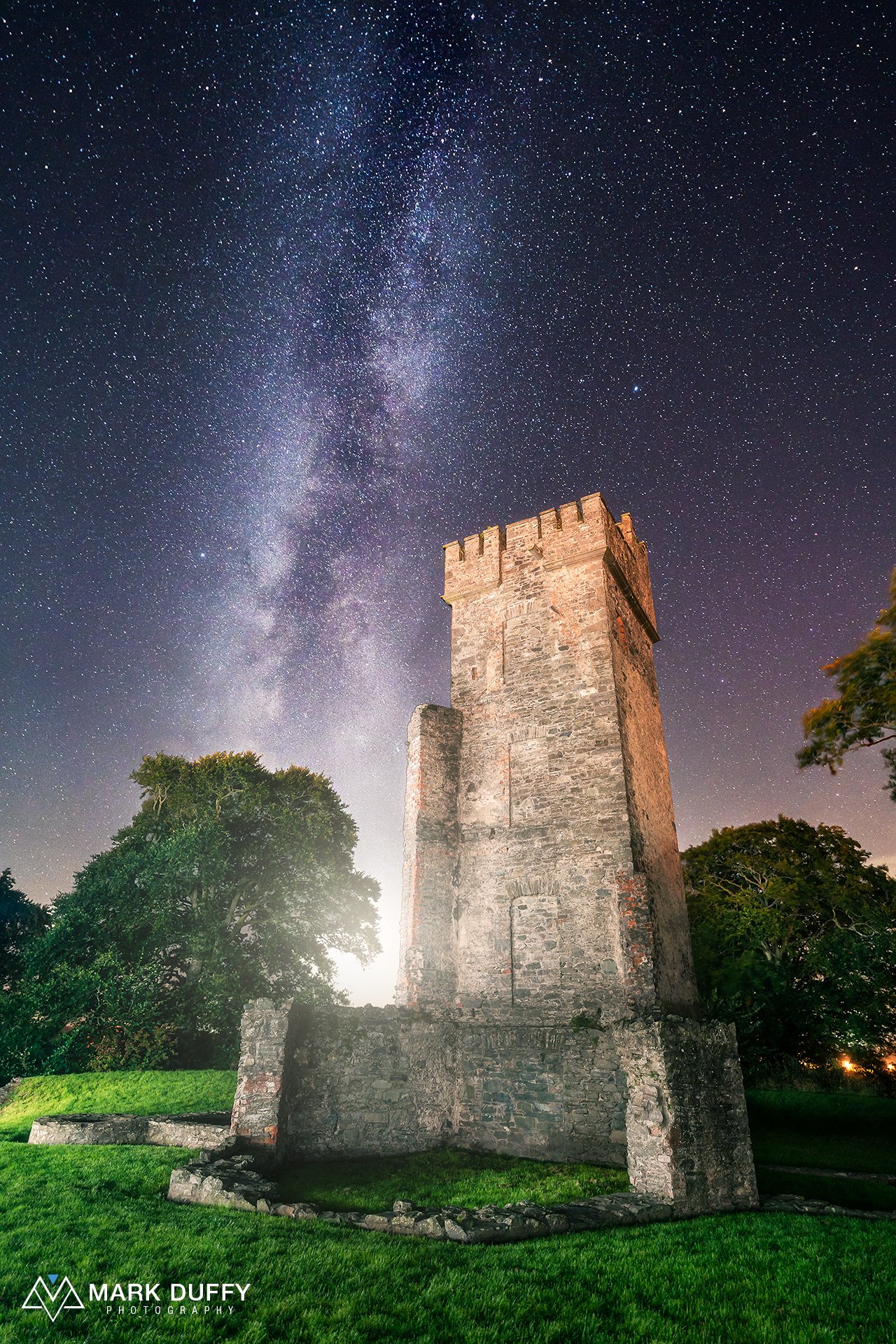 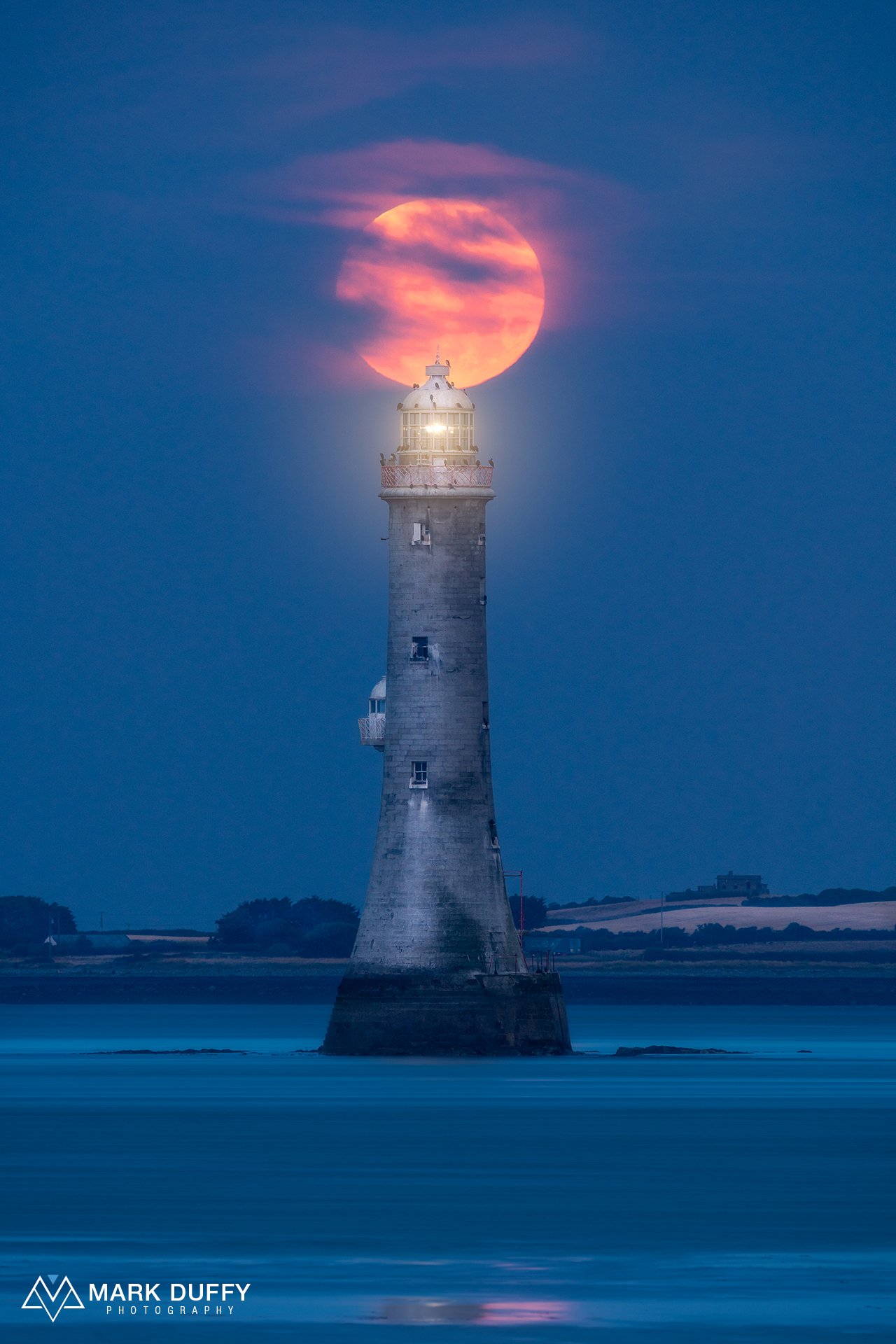 Who is your biggest inspiration as a Landscape Photographer.

My top 3 are Sean O’Riordan, Mark O’Brien and Steven Hanna