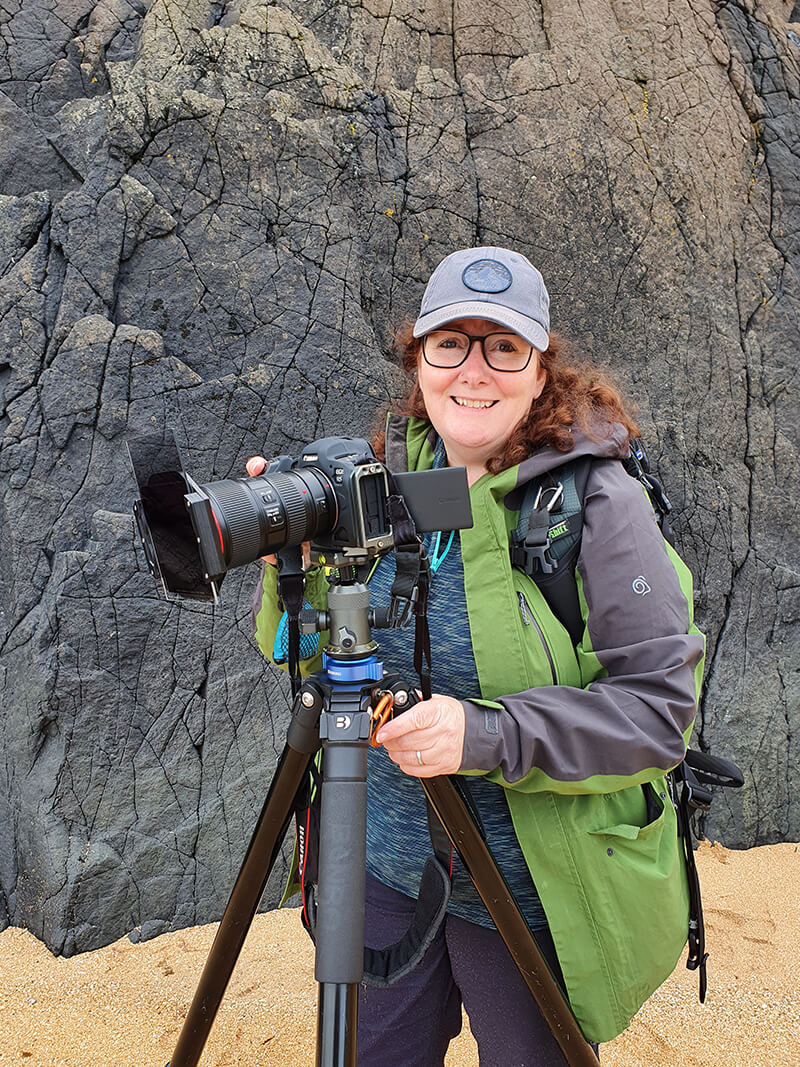 Hi, my name is Patricia Williams and I live in Crumlin, Co Antrim with my family. I’m self employed and work from home as a seamstress doing anything from wedding dresses to Roman blinds. I’ve been here for over 33 years but I was born and raised in the Falkland Islands. After travelling around the world for a year, I ended up in Northern Ireland and loved it so much I stayed. A few years down the track after a visit from an Uncle who was doing our family tree, I found out I had come back to where my family had originated from in the 1700s and still have cousins in the Dublin/Cork area.
Instagram Facebook

When I was about 8 an elderly lady who lived down the road gave us a set of books called the ‘Childrens Treasure House’ and they were filled with the most wonderful colour photos from around the world and I admired them for years to come.
I started travelling when I was 19 and backpacked for about a year, in that time I visited and worked in so many places but I think it was the time I spent in New Zealand, 8 months in fact, that I was stunned by the scenery and really regretted having no way of capturing it all, I borrowed a film camera for a week and couldn’t wait for the films to be developed, some actually came out ok and I still have the prints now.
The final push happened not long after I arrived here I was visiting Westport and walked into a camera shop/art gallery and was blown away by the seascapes that hung there, one of them was a minimalistic scene and right there and then I was in love with what the camera could capture. I searched the catalogues (as that is what you did in those days) and ordered a Pentax K1000 with a 50mm lens, then life became a circle of buying films, getting them processed, getting disappointed and sometimes pleasantly surprised. Once I had children and money became more of an issue, photography was kept for family outings only and more or less stopped for almost 16 years.
Previous
Next

Its hard to pick one out as a stand out story, I’ve lots that stick in my head but not for reasons I can describe in detail. I love storms and the more dramatic the better, especially beside the sea. One evening on the beach at Ballycastle I had been photographing the Pan rocks during a particularly high tide, the waves were massive and the sky had those huge types of dark cloud that just added to the scene, over Rathlin the first rumbles of thunder could be heard followed by lightening in the distance, there was no way I was leaving as the dark closed in and my hope was the lightening would get closer, by now the tide was almost at its highest and the waves were rolling right into the bank and every now and then I would have to lift the tripod and get myself onto higher ground to avoid getting wet, needless to say even with the wellies on I didn’t stay dry and found myself waist deep in water holding onto a fence that runs part of the beach, my tripod was set at a height of about 5ft so I dug it firmly into the sand and held on for grim death, we both came out of it unscathed but it was a lesson on how nature is always stronger. I did get a few lightening shots but nothing worth showing and the experience still makes me smile. It hasn’t stopped my fascination with the sea and I still get wet on occasions but only to the ankles.

I’ve had a few and I think like most people they involve forgetting a spare battery or on one occasion my memory cards, which saw me running around asking if anyone had a spare one I could buy but the worst had to be on the rocky beach at Minerstown looking over to the Mournes, I had just purchased a new Nisi filter with the V5 holder set and they’re not cheap, so I was all set up with the tripod, camera in place and attached the brand new holder along with the Cpl and a 2 stop GND filter to capture the soft sunset that was just starting to happen, the tripod needed to be moved slightly and there was this awful sound as something man made hit the ground, grating off the rocks that I was standing on, I knew immediately what had happened and I hadn’t tightened the wee screw at the side of the holder properly, it must have taken me a whole 5 minutes before I could bring myself to look down to see the 2 stop GND lying broken in two and then the shameful walk back up the beach to my husband who had witnessed the whole thing and just shook his head. 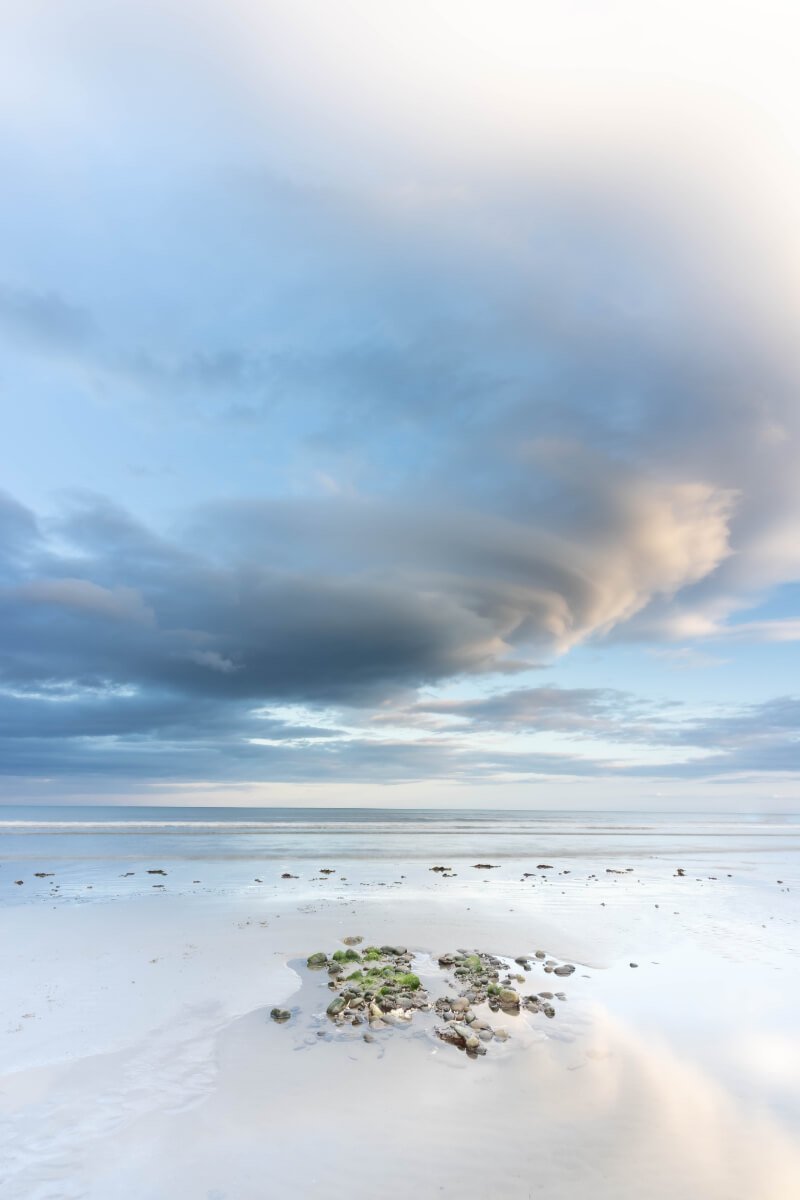 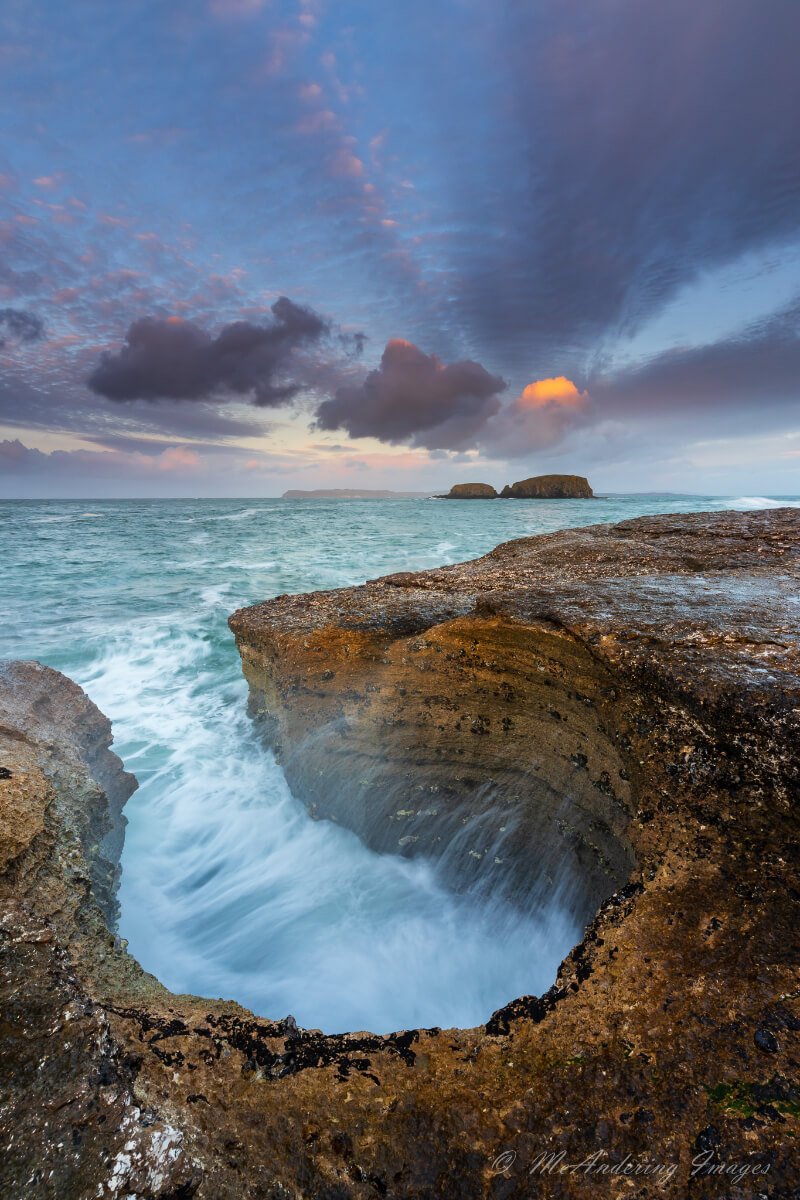 Definitely sunrise, there’s always more effort involved especially during the summer and those early mornings can be a killer, quite often my husband and I will sleep in the car the night before and I leave him sleeping whilst I head off to enjoy the solitude and calmness of morning light, it almost feels like the troubles from the day before are swept away and as I watch the sun come up it brings another new and amazing day to come. These days I usually have a few early morning swimmers to compete with for the best locations.

I’ve two! The first has to be Murlough Bay on the Co Antrim coast, its amazing, always one for the sunrise but its like the land that time forgot, as you descend down the small windy road surrounded by the cliffs on either side and into the ancient woodlands and wonderful rocky shoreline you could be lucky enough to catch site of deer, stoat, foxes etc and of course on a clear day Scotland can be seen across the Irish Sea.
Fanad Head has a big place in my heart and I wish I lived closer, I could sit on the rocks for hours and watch the waves but its in the hours of dusk and the light shines out from the lighthouse that it really comes to life, no matter what the weather I never come away feeling disappointed.

Probably one from Glencoe at that spot that everyone who has been there knows, where the waterfall tumbles down and the Buachaille Etive Mor fills the background. I went there one morning for sunrise and every place was filled with a photographer, so I just headed up stream and was happy with what I got there, as we were heading back the photographers had gone back to their cars as the rain had started but I thought as I had it to myself, I’ll take a few images anyway, I climbed down into the stream, set up and at that the rain stopped and out came a rainbow just perfectly placed. 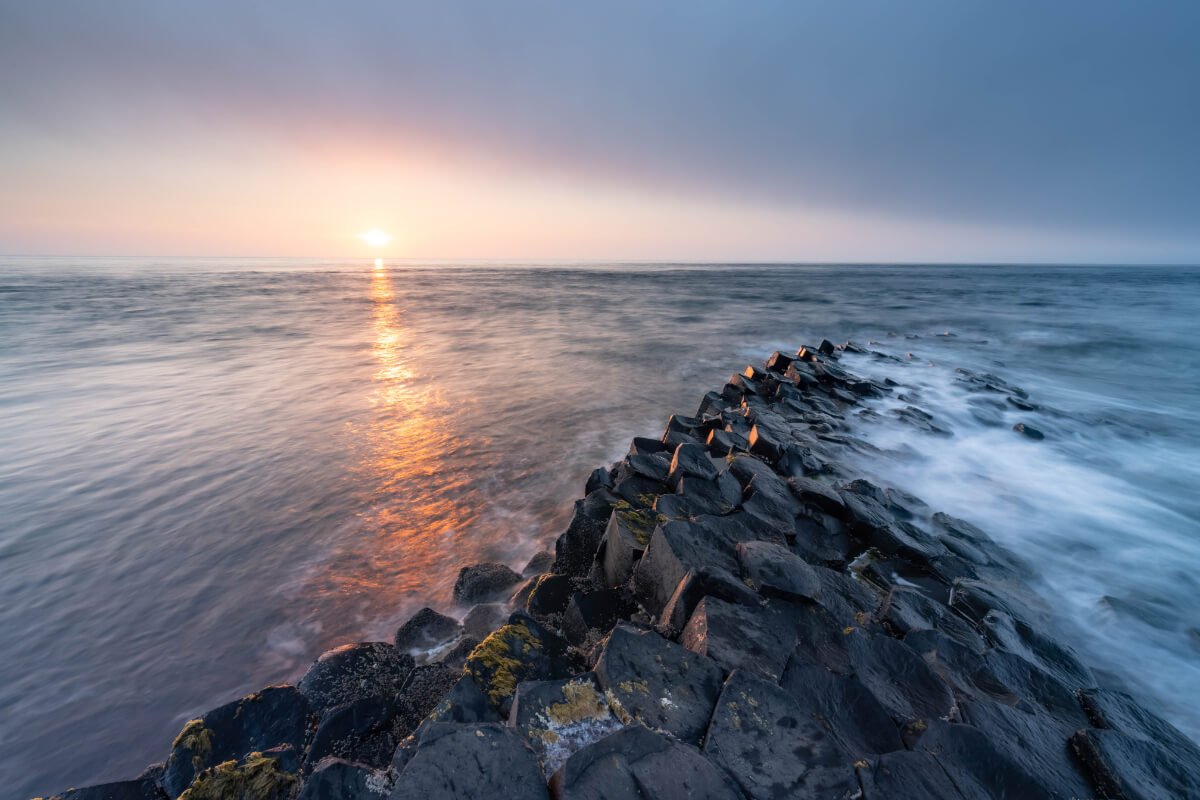 I switched to the mirrorless system last year going from a Canon 6d to the EOS R but have just got myself the R5, I use it along with the 16-35mm and 70-200 for my landscape work. The Benro tripods are brilliant and I’ve a large sturdy one for the beach and a smaller one for hiking in the hills. I use the Nisi filter range but have also discovered the Benro filters are every bit as good.

Take the advice of photographers whose work you like and admire.
Don’t buy cheap filters, I spent a fortune on them and could have saved and got myself something I was happy with from the start.

When you think its time to leave wait for 10 more minutes, you just never know! 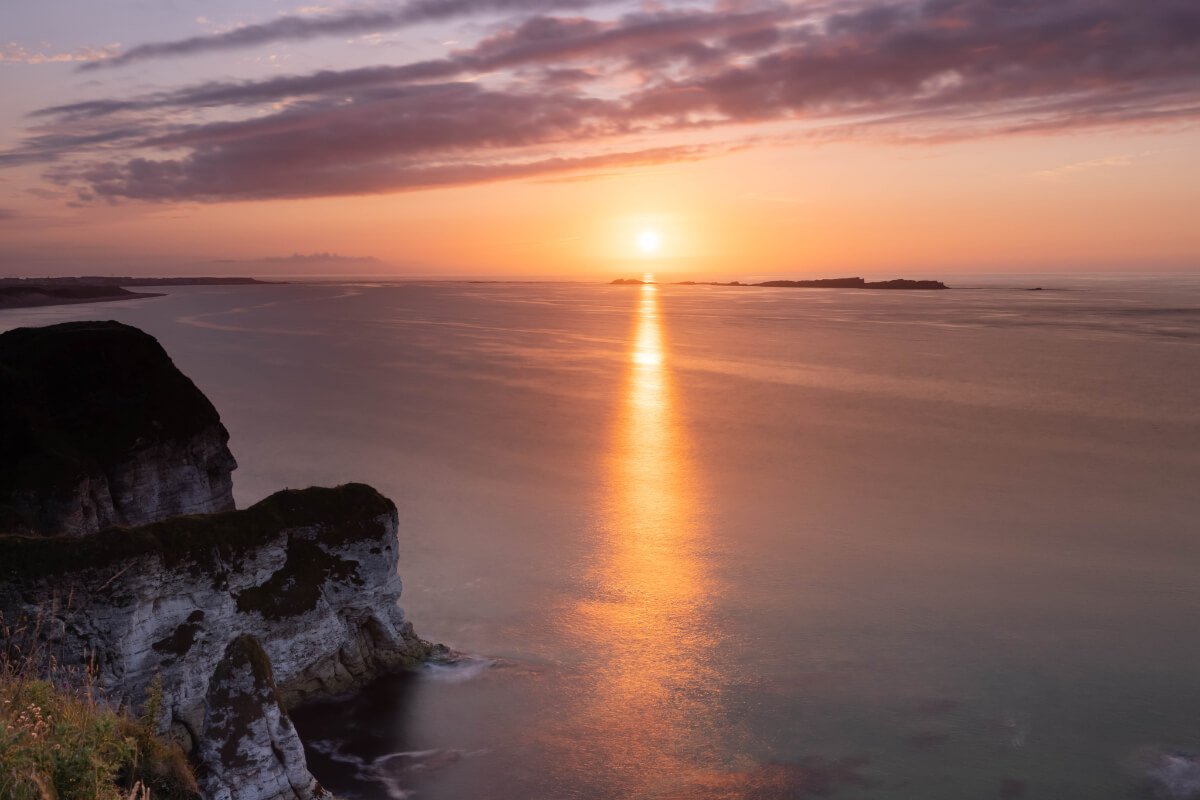 I’ve a few, I love the work of Eimhear Collins, Bernard Geraghty, Max Malloy but my favourite has to be Marius Kasteckas, his images have a quality about them that appeals to me.

Not Irish but has to be mentioned, the one and only Mads Peter Iversen but then who isn’t a fan!