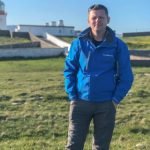 What started off as a chance encounter in June 2018 has turned into a 13 month historical and photography adventure! From Malin Head to Mizen Head and everywhere in between, this journey has taken us to places i thought I would never see and some places I hadn’t even heard of before. I first came across one of these markings at Malin Head. At first I thought nothing of it, but in the back of my mind I was curious. ‘What is that big strange white marking?’It wasn’t until a few weeks later that we had discovered there were more markers along the coast: The next ones we came across were ’74 Éire’ at Crohy Head and Éire 59 on Achill Island. We had been on Achill Island for a weekend break. The weather was good, so I was able to get out to sea and capture some of the dramatic coast line. This is great I thought, can’t wait to get back to the hotel and have a look and see what I’ve captured. As I sat scrolling through the photos… BOOM! another one! “59 Éire” my mind shot back to Malin Head “80 Éire” and number 74 Éire at Crohy Head. The three signs were in pretty good condition; people had obviously put time and effort into creating these signs and they were impressive to look at from the air. Naturally, we wondered why they were there and with some searching on the internet, we had the answers! It sparked my interest from the get-go; I had never known about these markings and knew very little of Ireland’s stance during the Second World War. (We’ve added a little of what they were and what they were used for below) I began to research more and came across a simple map on the Irish Military Archives and wondered could I use this map to guide me to these places to see more of these markers? From that moment on the project was born! I ran the idea by Emma and it was a go! (It was also a great chance for her to use her history degree and she’ll be fuming at me for saying that!) 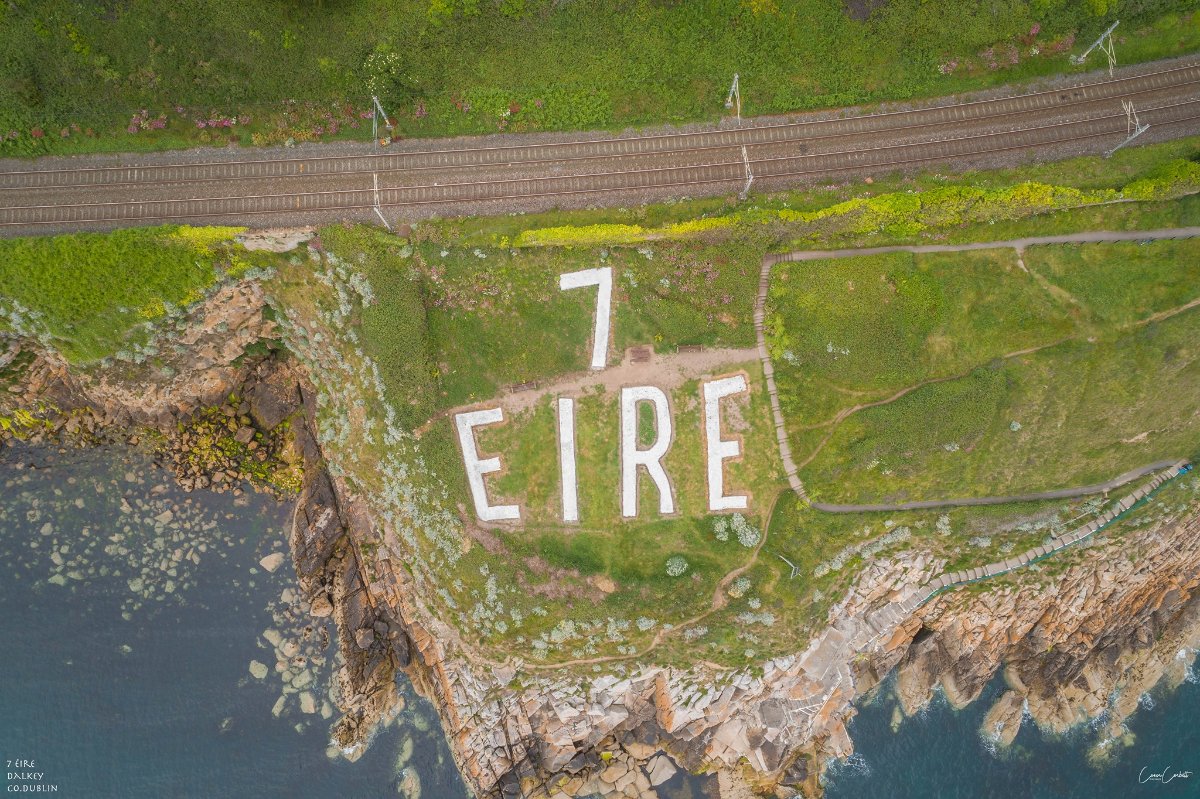 The obvious place to start was Co.Donegal as Emma is from Derry and was closer to home. Even though we knew Donegal well enough, we found the Donegal part of the adventure challenging. On the weekends, (weather permitting) we were trying to get to headlands, some of which felt impossible to reach, trying to locate signs made out of rock, that were seventy five years old! Even if we had the right locations from the map, we weren’t sure if we would find any remains of the markers. Sometimes it felt like a wild goose chase, but my curiosity had been piqued and my adventurous side kicked in and we decided to keep going. It was around this time that Emma came across a site eiremarkings.org managed by a lady named Treasa Lynch. Treasa had spotted the Éire Markers from Google and Bing satellite images and had mapped the locations (If you’ve ever tried doing this yourself, you’ll know how impressive that task is) We had learned that 83 signs were created originally and from Treasa’s website, that as many as thirty probably still remained in various states of repair along the coast. Most of them along the Wild Atlantic Way. Now I had a visual aid and a map. It was a real turning point for the adventure; as what was a seemingly impossible task to complete, now became very possible. We didn’t know how long it would take us, but the journey was now in full swing!

What were they used for?

We discovered that the Éire signs were built as neutrality markers to alert World War Two pilots as they were flying over Ireland, a neutral Country. They had been built by the volunteers of the Coastal Watch Service, that had been in operation since 1939. The Coastal watch were made up of local men, whose job was to record military activities they had observed along the coast. They recorded any activity into a logbook. (some logbooks can be read online Home | Military Archives) and they were to report any aircraft / submarine sightings via telephone. 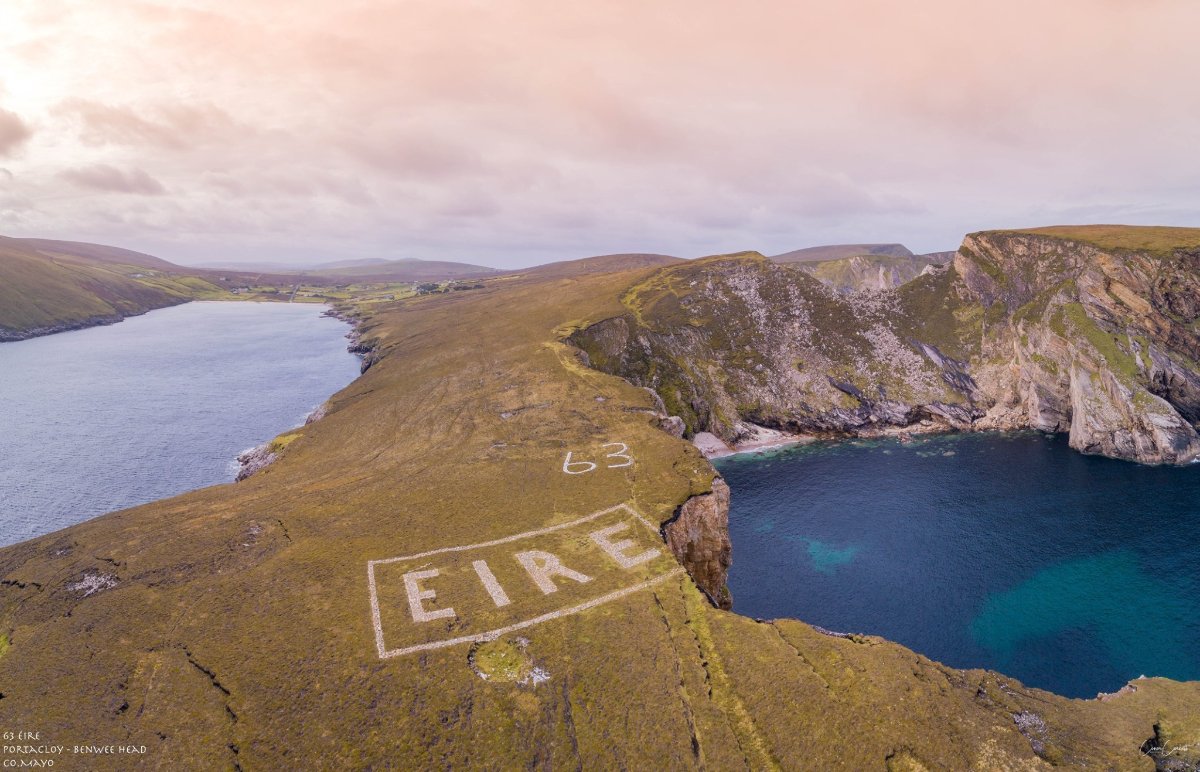 The Coastal Watch were stationed in modest looking buildings called Look-Out Posts (LOPs) at 83 locations, five to fifteen miles apart along the coast of Ireland; starting at no.1 Ballagan point in Co.Louth to no.82 at Inishowen Head in Co.Donegal. Number 83 at Foileye Head in Co.Kerry is the only LOP not in sequence, as it was added at a later date to the rest. Many of the LOPs were situated on former Napoleonic Signal Tower Sites. As we were locating the markers, we would often spot both buildings; the modest looking Look out post and the Napoleonic Martello towers near the Markers, some LOPs like the one we encountered on Valentia Island used a refurbished Martello tower as their base.

The Éire signs were added 1942-1943: A need had arose for them, as the number of sightings of aircraft were increasing steadily during the war and there had also been a number of crash landings in Ireland. The signs were placed close to each LOP and shortly afterwards at the request of the US airforce the number of the relevant LOP was added. The signs were originally built to alert pilots that they were flying over Ireland which was neutral as opposed to Northern Ireland which was not. Whilst travelling around locating the markers we could see for ourselves just how important the markers must have been, especially in places like no.82 at Inishowen Head; where Northern Ireland and Ireland are just separated by Lough Foyle. The numbers added to the signs transformed them into navigational aids (an early form of GPS if you will) as a map of the numbered LOPs was then given to allied pilots so that the signs could then be used as a way to find their bearings, if they became lost or disorientated. This was an attempt to try and reduce the number of crash landings in Ireland. Despite this 16 crashes still occurred, but at least one plane was able to reorientate themselves using the markers and were able to navigate to Shannon Airport.
To make the signs visible to pilots they were made out of local rock, cemented into place and white washed. They had to be a standard size of 12m by 6m surrounded by a wide rectangular border. These were given an aerial inspection by General Hill of the US Airforce based in Northern Ireland and the Chief of Staff of Ireland, General McKenna. Any signs that were too small the Coastal Watch were instructed to make bigger to the standard specifications. We believe we may have come across one such example of this at 48 Éire in Co.Clare. The photo captured clearly shows two Eire signs next to each other, one sign significantly larger than the other.

End of the War

Once the war was over, there was no longer a need for the Éire signs or the Coastal Watch Service, They had served their purpose during the war. The service was disbanded and many of the signs were removed if the land was arable or they were recycled to be for used for walls etc on farmland. Most were abandoned and subsequently overgrown by gorse and vegetation. This is what happened at No.8 Bray Head Co.Wicklow. Forgotten until a gorse fire revealed it in 2018. Of those that remain, we found that they were mainly inaccessible headlands unsuited to farming along the west coast. They were also remote areas, which is probably why, despite many of the signs surviving they were largely forgotten about, at least as a collection. Many locals know about their own Éire sign in their area and quite a few have been maintained or restored; like those on Malin Head, Crohy Head, Achill Island and Downpatrick Head, but until the use of drone photography not many people knew so many still existed. The remote areas and the difficultly in locating some of the markers along the headlands not only made it a long journey, but it also made it an exciting one and an adventure where we rediscovered the beauty of Ireland’s Coast. Whilst the goal of the project was to document what was left of the markers in their various states of repair, it turned into a creative project that blended history with scenery and creativity. 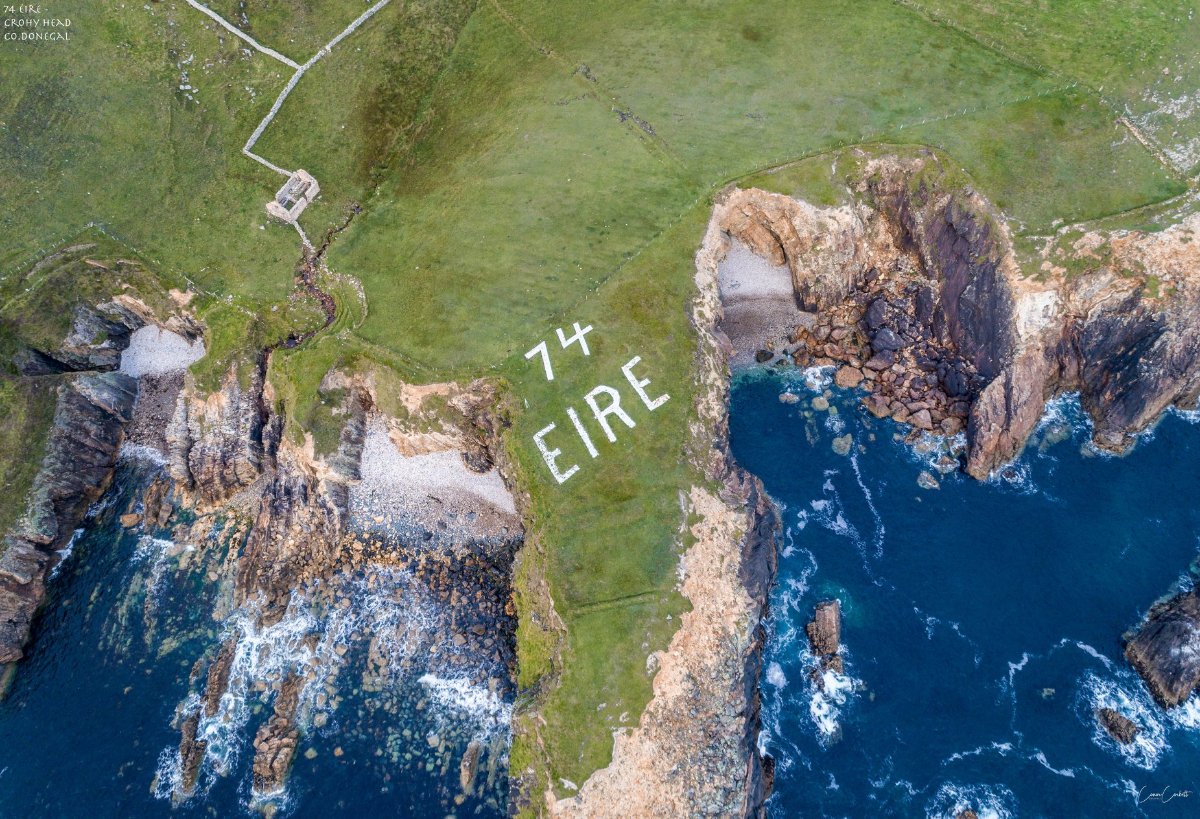 The original plan was just to photograph the remaining markers in Co.Donegal but my mind was thinking “I wonder what they would all look like in a collection”. We were probably halfway through photographing Donegal when 8 Éire was uncovered by a gorse fire at Bray Head Co.Wicklow, which gained a massive interest from the public so the timing of the project was pure luck! It was far from plain sailing. There were many ups and down; countless hours, miles, early starts, late nights, car problems, drone problems, wrong turns, lonely backroads that led into dead ends and one very strange encounter with an Airbnb… But that’s a story for another time! To say we were off the beaten track would be an understatement! There are just some places a small Ford Fiesta shouldn’t be or can’t get to but Emma got us there! Each location presents it’s own problems and I believe each marker has a story to tell and seems to take on a personality of it’s own.
Throughout the journey we’ve not only collected photographs of the remaining Eire Signs, but we’ve also collected adventures and our stories along the way. There were too many experiences to share here; far too much to write about in one post, but we felt that the story from Sheep’s Head encapsulates the many challenges and achievements we experienced along the whole journey. As I said before each Marker has its own story, but we’d be here forever writing about it. 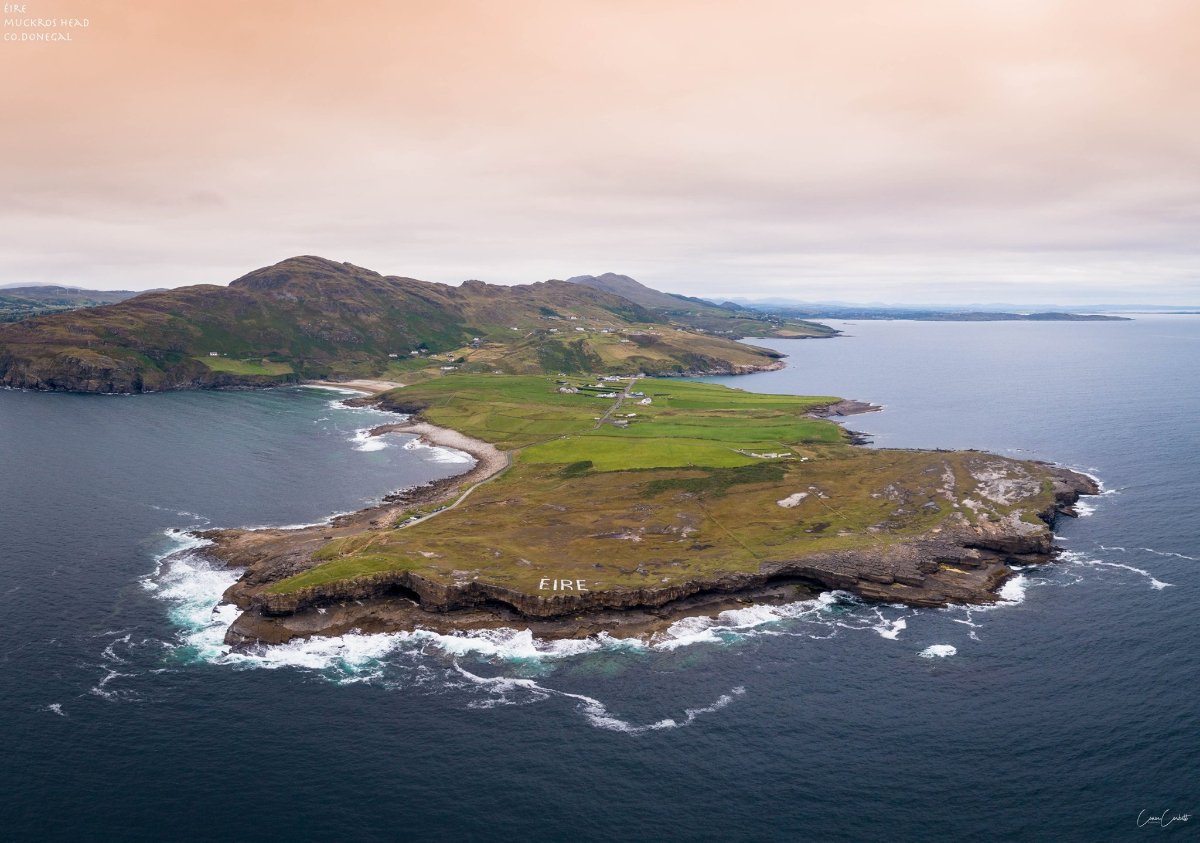 End of the journey thus far.

In total we’ve captured what we believe to be, the remaining markers in Ireland. There are 41 in total. You can reference the maps made for the project below: One showing the original locations for Look Out Posts and the other indicating The Éire Signs that we’ve found. While we feel that this project has drawn to a close, it’s probably far from finished: Since we’ve started the project, signs have been revealed (8 Éire, Bray Head, Co.Wicklow) restored (7 Éire, Dalkey, Dublin) and are currently in the process of being restored (75 Éire, Arranmore Island Donegal) and there are also talks about restoring 6 Éire, Howth in Co. Dublin. These are all individual projects by locals, so who knows what the future holds. Maybe one day they’ll all be found/restored and we will have to undertake our adventure all over again.
© All images are copyrighted to Photographer Conor Corbett